500! The Songs of Ukulele Underground

Luther Blessitt's piece "Rubbing of a leather jacket against a wickerwork chair" follows the classical tradition of the master of minimalism John Cage, although it has been argued that he was greatly influence by the
seminal work of Karlheinz Stockhausen and his ground-breaking experiments in music using controlled chance.

Stockhausen often wrote music that was impossible to play, or made the scores so long and complicated that there was never sufficient time to play it in its entirety.

Leif Inge has taken this concept to the extreme where he has slowed down a recording of Ludwig van Beethoven's ninth symphony stretched to 24 hours, without pitch distortion. It was started on saturday
may 7th, 2005, at 20h15 (the moment of sunset (local time) in Vienna, Austria,
where Beethoven's ninth symphony was first performed, on may 7th, 1824) and it has been playing ever since.(that is a lie it stopped in 2017) For more information on "9 Beet Stretch" go here

Here's some more Beatles. One of the few Beatles songs I really properly like. Been meaning to learn it for ages and as I tend to do with this sort of song, I've got carried away a bit.

I think that YouTube had a temporary glitch around 6 hours ago with the default visibility settings. Brian, Steve and Ryan's new videos don't show. I don't know if you can sort it out manually. BobJKing posted a video with Chelle about two hours ago, and that is visible on YouTube.

500 seasons! Man, that is something...
I'm still a relative newcomer, really. I didn't rock up on the Seasons until 416. I'd stumbled across various videos of this mysterious 'Seasons of the Ukulele' several times and couldn't work out what the hell it was and it was actually Lynda who commented and clued me into coming and having a look. I finally decided to dip my toe in and I was made to feel very welcome from the very first entry. I've been a fairly regular participant since then I'm constantly amazed by the creativity, talent, encouragement and freindship that exists in this wonderful group. It's undoubtedly made me a better and much more confident performer and hugely broadened my horizons musically and continues to do so!
Here's my contribution to the celebrations, in my preferred method of 'banged out straight to phone'...
Here's to the next 500!

Ms Bean said:
I think that YouTube had a temporary glitch around 6 hours ago with the default visibility settings. Brian, Steve and Ryan's new videos don't show. I don't know if you can sort it out manually. BobJKing posted a video with Chelle about two hours ago, and that is visible on YouTube.
Click to expand...

I noticed it too. It's just the preview that doesn't show, if you click the embedded video it still plays.

I was happy to find this song on the list, which I have recently worked out an arrangement for

Half Uke Half Biscuit

Here's a song that I've definitely seen on a list here on Ukulele Underground. It's a cover of a paoriginal about our favourite little instrument. It's a catchy little tune and it got stuck in my head, so I thought I'd record it. It's still stuck in my head. As Jim Yates also said in the comments, every ukulele player should learn this!

SOTU 500 - I'll add my rendition of Brian's song to the list. Thank you for a perfect ukulele song Pa!
(And thanks for inspiring me to record it Edwin.)
I'd love to get together with all of you and do this together.

so pleased to see my little uke song being played in Scotland and Canada - thank you!
the seasons is a wonderful place - not without its ups and downs - but a wonderful place
just some of my treasured items from the seasons and ukulele underground over the years
still have the bottle from the tasty Vermont? maple syrup and quite a few cds
photos insert quite differently on this new platform.....i had to keep resizing them as they were HUGE 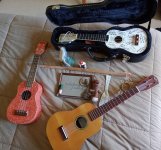 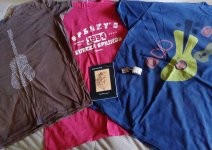 Half Uke Half Biscuit

pabrizzer said:
so pleased to see my little uke song being played in Scotland and Canada - thank you!
Click to expand...

It is quite the earworm... it's still stuck in my head!

I’ve just checked - I posted my first Seasons entry on June 3rd 2018 for Season 328, 8 months after first picking up a ukulele. The Seasons community has been a real inspiration and catalyst in my ongoing musical development, not only with uke but it also prompted me to return after many years to keyboards and multitracking, and songwriting too. Thank you to everyone here for making this the special little corner of the internet that it is!

And big thanks to Joko for hosting this special landmark Season! Here’s a song that everyone will know - I’ve used electric baritone uke (with GarageBand ’dreamy texture’ effects), vocal harmonies and synth bass, pads, piano and percussion to give it a slightly different feel, without (I hope) straying too far from the spirit of the original.

This was on the UU list so I decided to give it a go. It had to include the signature bass line. I found a piano version on line and used the wonders of midi to create a bass guitar sound. I also added some synth strings in the chorus. If you see ads on the video it's because the copyright owner has registered their claim not because I have monetised my channel. 6 String tenor uke tuned DGBE and instrumental from low D whistle.

Hello again, Joko ... and yet another song from the "Beginner Song List;" I told you, I know no shame! This song appeared in "The Music Man" and was recorded by the Beatles in 1963, on their second album ...

GinnyT11 said:
I'd like to put up the Seasonistas Anthem video that we made in 2014.
Click to expand...

It's got an honorary addition to the playlist.

I submitted my first video for Season 215 (2 and 1 chord songs) like Val. Since then, I've spent many wonderful moments, listening to other Seasonistas, discovering new songs and learning both fun and serious facts about music. "Autumn Leaves" with some autumn photos this week from me:

Except for Kolibiri just now, I think I've got all the eligible songs here on this picker wheel.. I have such fun with these little tools.

I came in at Season 249 with a fingerpicking version of Bob Dylan's Fourth Time Around, from Blonde on Blonde. So it only seems appropriate to pull some more Dylan from the UU library.


I am pretty sure that I had to re-record my initial foray into the Seasons because the end of the original got cut off due to lack of space on my phone. I also posted it to the forum in a non-standard way. I think it was either Pa or Lynda (BEVOMU) who sorted me out. Like Bob, I had run into videos labeled as Seasons of the Ukulele for a while when I first learning. I think I found the forum on my own? I definitely lurked for a solid few months before working up the gumption to try. Thanks to you Joko, for hosting this momentous season (can't believe I've been here for just over half of them now). And big thanks to all of the Seasonistas - past, present, and future - who have helped me along the way. Here's to another 500+

My internet is being weird and I can't comment on your videos tonight for some reason. :/

Anyway, let's see if this goes through...My 2nd submission this week. I actually learned this whole song from Aldrine's UU tutorial a full 4+ years before I joined this site!

This is the first time I've played all the parts to this song as a whole piece. It's quite a lot of fun!

here's a little homemade song from me, i'm looking forward to listening to what other folks have brought to this wonderful party, celebrating an amazing 500 seasons