It's sold now, but earlier today Matt at World of Ukes posted a link to a very unusual Brüko instrument he was offering, a 3-string ukulele… I've never seen anything like it. 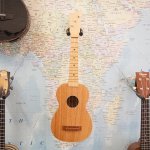 That is interesting for sure.
A year or two ago I put together a "bento box" uke kit from CB Gitty. I initially set it up as a 3 string with C E A tuning. It was fun to play. Just strumming chords I can't say I missed the high g much, if any. Fingerpicking within chords wasn't bad either. For someone who does some more involved finger picking and melody playing it'd be a challenge probably.
I ended up modifying it again to a 2 string tuned to work well as a diatonic instrument.

A couple of decades ago, my brother, Bob was given a balalaika which he , being a mandolin player, tunes DAE. Many fiddle tunes don't make use of the low G string on the mandolin (or fiddle).
A ukulele player might want to tune it GEA. Is that how you'd tune the 3 string uke? 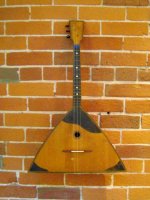 I had one once, for about a day, after I broke one of my strings....
T

If it is set up with G, E, A strings, you can still play Jake's Missing Three in original form

If you're more of a picker than a strummer, every re-entrant ukulele is only a 3 string instrument anyway. Not much difference.
G

ripock said:
If you're more of a picker than a strummer, every re-entrant ukulele is only a 3 string instrument anyway. Not much difference.
Click to expand...

That was going through my mind too. However, some of what I play requires chords and that can include use of the fourth string. I suppose that for single note at a time melody picking - plus minor and major chords ? - three strings is enough. One Old Uke that I bought was set up that way, IIRC the g string was missing and I wondered about whether that had been intentional or not. A somewhat cheaper option than the £169 sticker price for the old Bruko, but as it sold there’s someone out there that didn’t think the price unreasonable.

It would be interesting to know more about the instrument’s sales details but this is all we have from WOU:

“First things first, I am not sure how old this instrument is - only that it must pre-date the mid-80’s when the white soundhole interior rim was discontinued. And, I don’t know what it is made of either - although Bruko only used solid wood, so we can say it’s all solid… something!

The reason I can’t tell you more? This is a 3-string ukulele, with just a C, E and A string, with no G, to which I can find no reference anywhere. Clearly, not many were made, if any more than this one! Therefore, a lot of the value is in that rarity, as… well… this three string sounds about 75% as good as an equivalent Bruko 4-string ukulele! That said, it’s quite an interesting thing to play, and, as I said, if your collection doesn’t include a 3-string, that’s because you’ll be hard pressed to find one anywhere else!

It has some age to it too, and a few dings and scratches to match, but nothing that’s a problem in terms of how it plays or sounds.”

A quick google leads back to an old - but not particularly good - thread here on three string Ukuleles, but that thread did include this video of a Fried Shields instrument :

I saw a 22" 3-string labeled as a guitar, meant to teach kids. It was in one of those catalogs that seem to arrive before the holidays (uncommon goods). There are no details like scale length and the neck looks like a yardstick (narrow). I'm sure it would work CEA, although maybe with string change needed. They also have an electric version.
Last edited: Nov 29, 2021

I play in a jug band and like to play 2 or3 songs each show using the ukulele. At a bandshell gig a few summers ago, I broke the 4th string before the show began and was able to play a few tunes using just 3 strings. I'm not sure if anyone noticed.
This photo was taken just before I broke the string. The design of the "tailpiece" is not great. There are some sharp edges not really designed for nylon strings. I've considered putting a real tailpiece on this uke. 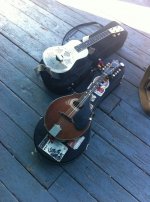 The string that broke was from the Worth re-entrant set that was on the uke. When I got home I replaced it with an Aquila Red low G string and it has remained like that.
Last edited: Dec 4, 2021
U

badhabits said:
I saw a 22" 3-string labeled as a guitar, meant to teach kids. It was in one of those catalogs that seem to arrive before the holidays (uncommon goods). There are no details like scale length and the neck looks like a yardstick (narrow). I'm sure it would work CEA, although maybe with string change needed. They also have an electric version.
Click to expand...

Are you referring to Loog?