I played rhythm guitar for a gypsy jazz group and it was a lot of fun...we had a great guitar player and a great violinist...those 2 were perfectionist and wanted to play things exactly like Django and Stephane played them...I was lucky in that the rhythm guitar was much easier. Turns out the lead guitarist decided that the guitar technique for playing Django style interferred with his technique for playing rock guitar. So, he willed me his spare guitar which is a Gitane 500...that thing has a huge voice and a great sound, imho. It is a lot of fun to play, I dont have the talent nor desire to learn to play all the Django stuff, like he did., but I do enjoy just playing standards on it...it has its own unique sound and is just a blast. I am humbled by his generosity for the gift of the guitar ! I have heard some gypsy jazz ukes also...they sound great as well...fun type of music for sure, or at least to me. Just curious if others have been hit by GJ guitar bug ?

When I played guitar, I was always intrigued by gypsy jazz style guitars, loved the music of Django Reinhardt and Stephane Grappelli, but couldn't afford one at the time. Much later when I started playing ukulele, a member of my group showed me a gypsy jazz style uke he had made. That got me researching luthiers and found Bruce Wei Arts in Vietnam who made me one for half the price of anyone else I contacted, $780 shipped to Los Angeles. All solid woods, curly maple top, Indian rose wood body, nice binding and purfling. It took almost two years for it to open up, now it's one of my favorites.

I have just started playing some gypsy jazz and really like it, but I have a lot of work to do. I visited a friend, who owns a guitar shop, and walked away with a really nice guitar a couple weeks ago. A small builder in Spain, G. Mateo.

I have played guitar (and mandolin and banjo) for a long time, but the technique is quite different. 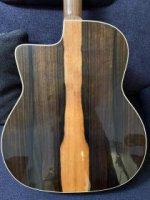 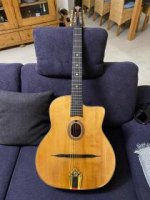 I love to listen to and play gypsy jazz. I have an Altamira Sel-Mac copy (grand bouche). I'm also a violin and mandolin player. Sometimes I can talk my bluegrass club into jamming on Gypsy Bossa.

I had been looking for awhile and finally got a deal on a nice used Paris Swing petite bouche a few months ago and a Homespun Dvd by Paul Mehling and have been trying to learn the Django thing and a lot of it is counter intuitive to my usual style of play. One of the hardest things to get used to is that super thick pick. But I must say it’s well worth the effort as far as getting the sound. I’m using thicker picks for everything now. I do wish I had gotten a grand Bouche (big hole)for more bottom end but finding gypsy jazz guitars around here is really tough. Check out Djangobooks.com if you haven’t already to see some nice guitars all with video sound samples-and description by Michael Horowitz who is quite a fine player.
You must log in or register to reply here.
Share:
Facebook Twitter Reddit Pinterest Tumblr WhatsApp Email Share Link
Community platform by XenForo® © 2010-2021 XenForo Ltd.