Ask the person after you a random question

What's behind you?
L

Physically? A bookshelf, my wife's desk and the kitchen.

Emotionally? The love of a good woman. (oooh, drippy!)

What's the highest point you've been to on land?
C

I never paid much attention to elevation. Probably the highest is Yosemite NP high country at around 10k feet; I think that's higher than the ski resorts in PA, CA, and UT. On my quick research, the vocano parks on Big Island and Maui are pretty high too, so maybe there or Yosmite.

What's the richest and poorest you've ever been on paper?
L

Yep, Mauna Kea is something like 13k feet from the sea floor, but only 4k from sea level. I wanted to see the top of it, but the road was closed due to snow while we were there! (the Big Island is wild that way) Highest point I've been is probably Mount Mitchell, highest point in NC at over 6k feet. Though, I think I've driven I-70 across Colorado which may have put me over 11,000 feet. I did a "highpointing" trip with my son when he was about 14, we hit the high points in FL, AL, GA, NC, SC and TN. Neat trip idea if you like driving mountain roads and doing a little hiking.

Hmmm... richest and poorest... well, I spent a lot of years living paycheck-to-paycheck as many people do, but I was never homeless or hungry. Total assets on paper... I've been down over $300k (had two home mortgages at the same time right after we moved to FL, but that didn't last long), and presently have zero debt and am up... total assets (including two retirement funds)... probably $950k. Hard to say, as part of that is the house, and the housing market is weird right now. I also own half of a business, and wouldn't even know where to begin trying to value that! We're at significantly less than half of where my wife wants to before we retire!

Do you play in public, or just for your own amusement and pleasure?
C

I've played uke and piano in public; currently working on getting better at guitar. I also play all 3 to entertain family and friends. I hardly play for my own amusement, seems like I'm always just practicing when by myself.

How has the ukulele enhanced your life?

The ukulele has introduced me to all kinds of great people and music that I wouldn't have otherwise known.

In front of me... Beyond the monitor: a few harddish drives, a USB hub, a pot of plant; a window, and a wall.

Using a system of containment. I'm sitting at my desk. My desk is in my office. My office is inside my house. Etc. Etc. Etc. What contains the our universe? What contains that container? How big is it? Ok, that's too many questions. So, I'll just settle for...

If you can observe the Earth either forwards or backwards 100,000 years, which would you pick?
L

Well, geology and archaeology let us look 100,000 years into the past. We more or less know what happened there. More interesting would be to see how much we've succeeded in destroying the Earth after 100,000 years... or if the Earth just shrugged us off and continued as it was before us.

If you could change one physical attribute about yourself, what would it be? (make my ears quit ringing, please!)

No changes. While certainly not perfect, good enough to get by.

What's above you?
A 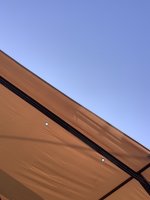 Do you know your 3rd cousins?

I know of them, but have never met them.

Do all of your relatives live in the same state (or province)?

Jan D said:
I know of them, but have never met them.

Do all of your relatives live in the same state (or province)?
Click to expand...

yes. my relatives are all living in the state of Tasmania.

what did you eat for lunch today?
L

I had my typical lunch salad today. Baby greens, sliced "ornamental" red bell pepper, cherry tomatoes, avocado, craisins, pumpkin seeds, and since there always seems to be some on the counter lately... fresh okra from my wife's garden. With Olive Garden italian dressing. I like my salad like I like my pizza: Everything on it.

What food do you enjoy now that you hated, or would never have considered trying, when you were a kid? (First ones I can think of are asparagus, which I hated because I only ever had it out of a can... and sushi, eeew raw fish!)

LorenFL said:
What food do you enjoy now that you hated, or would never have considered trying, when you were a kid? (First ones I can think of are asparagus, which I hated because I only ever had it out of a can... and sushi, eeew raw fish!)
Click to expand...

The list is long. As a child, I was a bit of a picky eater by nature. But, growing up in Nova Scotia, a great many foods were either unavailable or too expensive for our family. So a lot of the food I never tried as a child - and then later, as an adult, assumed I did not like - was primarily due to lack of exposure. Moving to the West Coast (Vancouver, BC) in my late 30’s opened my eyes. Moving to Santa Barbara, California 5 years after that was absolutely startling. Foods I’d never seen in person before - and some I’d never even heard of - were available (and affordable) on a daily basis at the local Farmers Markets.

But back to your question ...
Out of all of the foods I was convinced I hated and refused to try, but later came to love, #1 on the list would be avocados. Once again, they are cost-prohibitive (especially now that I live in Oregon), but my sincere thanks, nevertheless, to the avocado growers in California for introducing me to this marvelously yummy fruit.

If you were limited to eating only two foods every day, what would they be?

Do you like your coffee hot or cold?
A

Yes! Had one of each this morning (splurging on vacation ). Cold brew’s been my jam all summer.

How many seas and oceans have you wet your feet in? (Me: Pacific, Atlantic, Caribbean, Mediterranean, Red, Dead, Salish, Cortez)

What body of water is your favorite, and why?
C

There are so many... bathtubs, hottubs, swimming pools... just kidding! One place I always visit when I'm in Oahu is the "power plant beach". It's good for surfing, snorkle, SCUBA, or just swimming, all things I love and easily accessible from the parking lot. If you've never been, it's worth a visit if you like any of the above activities (be sure to go during work hours on weekdays; otherwise, the place can get packed).

Ever had a near-death experience? How was it?

I don't think I've had a near-death experience. If I did, I don't remember how it was.