So Asmus Ukulele Company are newcomers. They sell inexpensive solid ukes, apparently. Anyone have one? Curious for reviews.
Thanks!

Looks like the same factory that builds KPK and Keli'i. They could be interesting, I liked the KPK I had even though it was a little overbuilt.

I, too, thought that it looks very similar to my KPK. I compared the dimensions of these against the KPK and they are close, but not the same. They still could be from the same factory, though.

I found their You Tube channel which has sound samples. I'm intrigued I must say...

One needs to be cautious about making decisions based on videos - especially YouTube videos. Because of the automatic gain control built into consumer video cameras a video will tell you little about how loud the uke may be (one trick if there is a fair amount of background noise is to see how far the background noise fades when the uke is actually being played - if it doesn't fade much then the uke probably has very little volume).

YouTube hosted videos are some of the worst for sampling musical instruments because they really butcher the finer nuances of the audio with their compression and processing.

I'm not saying these might not be great ukes...I didn't even listen to the vids...just putting some info out there about not letting yourself be swayed by videos that might not mean much.

Has anyone tried one of these in person yet. The price seems very good for the advertised product. $89 at Amazon for a solid top soprano.

I just received my new Asmus solid acacia plus tenor uke today and I thought I would share my thoughts. First, I am a beginner uke player and in no way associated with Asmus or any other uke company. I've owned guitars for 30 years but could never get them to work, so I bought my first uke about a month ago and now the Asmus is already the 5th uke I've added to my collection. (You could say I got the uke bug!) I also have a KPK solid acacia soprano, a Lanikai CK-C, an Oscar Schmidt OU2 concert, and I already gave away a vintage Kay soprano to my nephew. (I also have a Kala soprano on order, but it has not arrived yet.) These are the only ukes I've played, so my comments will be comparisons to them. 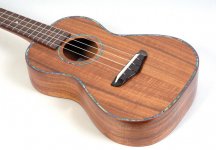 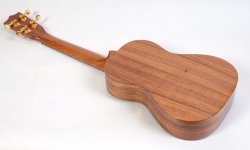 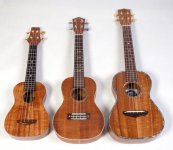 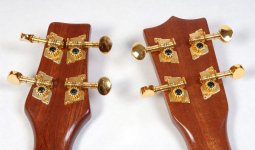 These are photos of the actual uke I received today from Asmus, and my KPK and Lanikai for comparison. I must say my first impressions were very good. Someone mentioned that the Asmus might be made in the same factory as the KPK, which upon examination of both seems very possible. They have a similar solid feel, they use identical gold-plated tuners, they both have a good warm sound with nice sustain. I noticed little details, like the shape of the heel of the neck, which is identical in both Asmus and KPK, but very different on my other ukes, which might indicate the same manufacturer. The action on the Asmus is nice and low and very easy compared to my Lanikai CK-C which I think is set too high, yet there is no fret buzz. The Asmus differs from the KPK in that it has white "nubone?" bridge and nut, whereas the KPK has rosewood nut and bridge.
The Asmus came in a cardboard box with a label on one end that says, "Made in China." Inside it was zipped in a fairly good gig bag, which they call "deluxe". (At least it came with a gig bag.)
I feel that it is every bit the quality of the KPK, which I think is a very well made and nice sounding instrument. I haven't played any of the really high-end ukes to compare it too, but I definitely think the KPK and Asmus are good values and I may have to trade my Lanikai concert for either a KPK or Asmus solid acacia uke.
The only negative thing I noticed when I played the Asmus was the volume. I'm not sure if it is just the lower sound of the tenor compared to the soprano and concert, but it seems quieter when played comparably to my others. Maybe that's just my inexperienced ear. My final opinion is this: try the Asmus. I don't think you will regret the purchase.
You must log in or register to reply here.
Share:
Facebook Twitter Reddit Pinterest Tumblr WhatsApp Email Share Link
Community platform by XenForo® © 2010-2021 XenForo Ltd.