A ton of photos:
https://flic.kr/s/aHskMaXznN


As compared to a regular tenor, Beau’s Grand Selmer tenor is a little larger. It has a wider lower bout (about the width of a baritone) and a slightly larger waist and upper bout.

I told Beau I loved the look of the Selmer-shaped tenor, but I was leary as I previously had a Selmer-shaped uke with lattice bracing that simply didn’t work for me. After explaining my experience, Beau decided to use lighter fan bracing and also suggested we use a 19” scale to make sure the larger top would get sufficient movement. He was so pleased with how this turned out that this bracing and 19” scale now will be standard on the Grand Selmer Tenor model.

Tone
Like most of my tenors, I’m tuned Linear Bb. Personally, I love the tone on this uke. The tone is definitely for those who lean toward a guitar sound versus a traditional Hawaiian uke sound. I have not tried it tuned re-entrant, but when tuned linear it’s more suited toward fingerstyle and chord melody than straight strumming (which is generally my experience with all linear tunings).

The 19” scale and the slightly larger body really add to the depth of tone here. To my ears, it's luscious. It’s not just my impression, either. Quite a few people commented to the same point at UGH where it was exhibited. Also, Jason Wolverton, a very skilled classical musician and himself a luthier who makes classical guitars and ukes, also commented immediately on the richness of the tone when I had a chance to show it to him.

Playability
I was concerned the 19” scale would be too big for me as I had a 20” scale baritone that was truly an incredible uke but I just could not get comfortable with the larger size. Some of the songs I’m working on (and will be for life, I suspect ;-) have 5-fret stretches and I could not do that at 20”. But I can do it on this 19".

This uke is just inside my comfort zone and felt very comfortable from the very first minute. For me, I think the difference between 20” and 19” is dramatic. The medium profile neck, 38mm width, and slightly smaller body (vs. baritone) also add to the playability and comfort for me.

Because what makes a uke playable for one person may not work for another, Beau will personalize the nut and fingerboard widths, string spacing, neck profile, and scale length at no additional charge.

Aesthetics
I love everything about the aesthetics of this ukulele. Elegant lines and curves are what comes to my mind when describing Beau’s design approach. Features such as his fading purfling headstock and his shaped heel are time consuming features that really help set apart Beau’s work. Other niceties include a “stepped” fretboard and pyramid-appointed bridge.

Beau’s mosaic rosettes are stunning and this was a must-have feature for me. He also chose the black MOP for the fretmarkers, which works really well as I think more pronounced white MOP markers would have been too busy.

The sunburst turned out great. Initially Beau was a bit reluctant to burst darker woods. I told him that while I had my heart set on his fantastic sunburst finish, I deferred to him on the final decision to do it or not. He took on the challenge and I couldn’t be happier with how it turned out. I think it’s stunning. He was also very pleased and said he’ll not be shy about bursting dark woods in the future.

Build Execution
I know it has no impact on anything other than aesthetics, but I have seen my share of ukuleles from respected luthiers with sections of wavy purflings, sloppy neck joins, sloppy gluing, poor fretmarkers and inconsistent finishes. These things matter to me because a large part of my enjoyment of an instrument is admiring the craftsmanship of a finely made instrument. Beau has continued to refine his builds and this uke is extremely well-executed in all respects, as was his Luthiers for a Cause uke.

Build Experience
Beau was great to work with on the build. He provided suggestions and took the time to understand what was important to me.

The build took a lot longer than originally expected, due to several contributing factors. For one, he didn’t have his shop set up yet but actually built it in the last year; for two, I didn’t mind delaying because it gave me more time to hone what I really wanted; and for three, he had a back issue that laid him up for a bit. And since he was also contributing to Luthiers for a Cause, I certainly didn’t mind waiting and volunteered to be bumped back as needed.

In the end, it worked out perfectly because he decided to exhibit this uke at the Hawaii Ukulele Festival, which was pretty cool because he wanted to do some nice touches to really show it off.

Now that Beau has his workshop up and running, I suspect he’ll be better able to meet his target timing. But even if he underestimates – as many luthiers do – it is unquestionably worth whatever wait is required. I have some pretty special ukes and this is as good as anything I have. 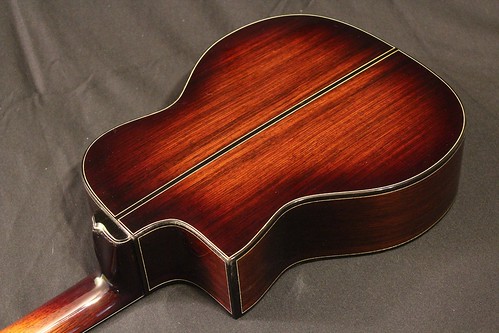 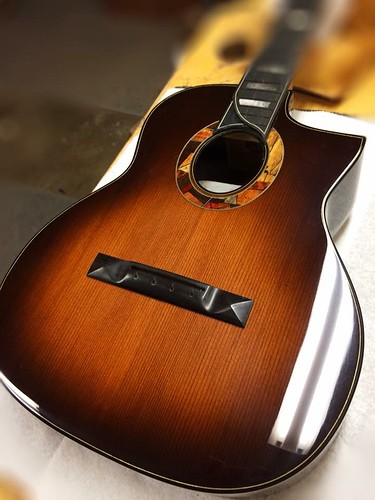 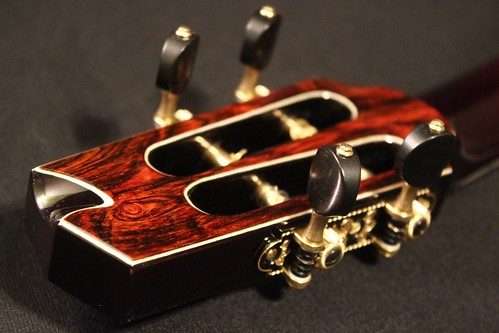 Meeting Beau and My Uke at UGH: Priceless. 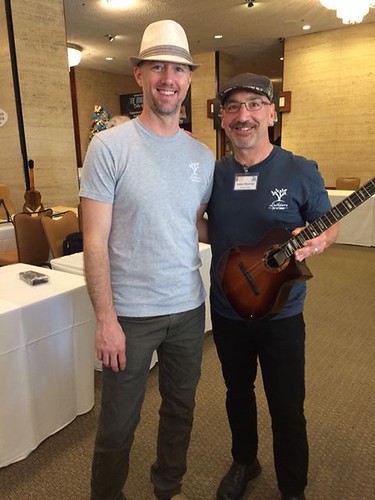 Wow! Looks and sounds amazing - love the tuners, bridge, rosette, the shape of the heel and that cool fretboard with the frets tapering off near the soundhole. The whole package is stunning - such craftsmanship.
Thanks so much for all the pics - I just love seeing the build process.
Congrats Eddie - certainly worth the wait!
Last edited: Jan 3, 2018

That's a beauty, but without a mustache bridge and tailpiece, it seems naked to me.
A

Wow! That sounds wonderful. What fantastic workmanship, the finish is just incredible.

I'm here to tell you that this instrument is everything that Eddie says and more. Simply put, it's just lovely!

kohanmike said:
That's a beauty, but without a mustache bridge and tailpiece, it seems naked to me.
Click to expand...

I can understand that if you're expecting a true Selmer. It's not meant to be a full Selmer-replica. It's simply a tip of the hat to the body shape, not the other design elements.

Awesome review Eddie & big congratulations, it's so wonderful to see instruments of this calibre being built, especially by an Australian Luthier

Eddie, we need to meet again so I can see it in person (I'll bring my Grande Bouche). In case you're interested, Sundays from 12-2 there's a Meetup of the Culver City Acoustic players at Carlson Park, Braddock and Motor.

It looks and sounds wonderful Eddie, definitely worth the wait. It appears that you have gone from a maple fanatic to a sunburst fantatic. Not a bad disease to have......not bad at all
Last edited: Jan 4, 2018

kohanmike said:
That's a beauty, but without a mustache bridge and tailpiece, it seems naked to me.
Click to expand...

I've done the more traditional selmer bridges before- i much prefer this style. Also, there is not enough downward pressure with uke strings to get a good tone when using a tailpiece.

Wow Eddie! What an outstanding instrument! Love the looks and sound. Beau's gorgeous headstock and double pyramid bridge, are excellent design elements. Wonderful how a talented luthier can make a classic design while including his own unique signature.

The 19-inch scale must help with the fine articulation and crispness in the sound. Yet, the Selmer wider body keeps the tone warm. Brilliant design! Well done!

Everything about this replication of a style coupled with the unique design elements makes it stunning. Way to go Eddie! What a sound. Congratulations!

Thanks, @all, for the nice comments!

Beau Hannam Ukuleles said:
I've done the more traditional selmer bridges before- i much prefer this style. Also, there is not enough downward pressure with uke strings to get a good tone when using a tailpiece.
Click to expand...

That's good to know, thanks Beau.

What is linear Bb flat tuning? The more common tuning of a tenor is a C6 chord. Does a Bb tuning have all the strings tuned down a whole tone?

Vic Arpeggio said:
What is linear Bb flat tuning? The more common tuning of a tenor is a C6 chord. Does a Bb tuning have all the strings tuned down a whole tone?
Click to expand...

Yes, a whole step (F-Bb-D-G). To me, all of my tenors sound better Bb than C. My Farallon sounds best at B. Many tenors have a natural body resonance that is close to a C, so can sound muddy there. Southcoast Strings has a lot of great info on this: http://southcoastukes.com/ti-tuningyouruke01.htm