I was lucky in a recent trade to acquire a 2010 spruce/walnut Boat Paddle baritone. 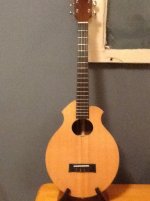 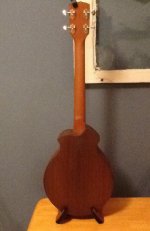 When I received it I switched the strings to a re-entrant set, and a buzzing came up in a couple of different spots. (NB: this in no way should impugn the UU member with whom I traded; he was meticulous in his account of the uke, and he seems like a stand-up guy in general.)

I tried the usual tricks to see if I could chase the buzz away, but to no avail, so I emailed Jerry Hoffman, the owner/luthier of BP ukuleles.

Over the course of a couple of emails, we decided it would be best for me to send the uke to him for inspection.

I shipped the uke; it spent a few days in transit; then Jerry received the instrument, shimmed the nut, made a new saddle, re-dressed frets two through ten, cleaned everything up, and sent the uke back to me (in a much nicer box than the one I sent him); it spent a few more days in transit; then it made it back to me. Start to finish it took two weeks.

The fast turn-around was pretty cool.

The emails Jerry sent for each step, including what he was doing, when he was done, when I should expect the uke back, etc. was very cool and much appreciated.

The fact that Jerry made these adjustments, for someone who did not even purchase his uke new, for free, was wicked cool.

As far as the uke is concerned, I'm enamored with both it's looks and tone.

The uke is simple and elegant. It's curves are lovely. It's edges are both (somehow) precise and soft. The pin nut design is supercool, too.

The fretboard is a touch wider at the nut (1 7/16th), and as a result it's angle of increase seems more gradual as you go up the board.

The action is low. The intonation is perfect.

The neck is a shallow and fast D-shape, and -- another cool feature -- has a uniform depth. (This felt a bit weird at first, but I've come to like it a lot.)

The uke is bit on the heavy side, but it's well balanced. It's easy to pick up and difficult to put down!

I'd describe the tone as clear and true. I tend to (try to) bend or pull off of fewer notes when I play this uke -- it's just so nice to let them ring out.

Here's a quick sound sample (apologies for the washing machine in the background): http://soundcloud.com/user92796094/bp-baritone/s-lITCI

Jerry Hoffman's work can be found at Boat Paddle Ukuleles: http://www.boatpaddleukuleles.com I highly recommend them.

Thanks, I enjoyed the sample. It sounds crisp and clear. I want to get one, but I've gotta wait 'til I can play better to justify the price. Well, someday . . . ld:

I'm sure such excellent customer service will entice some to give BP a try, as if your excellent sound sample isn't reason enough.

Very glad Jerry is finally getting some recognition. Boat Paddles are a great value.
B

Ive lusted after a baritone bp for a while now.... congrats and good to hear good people having good things spread about them!!

Not only is Jerry a talented Luthier, but he and his wife Jannelle host the Mighty Mo Ukulele Festival in New Haven, Mo. I had the pleasure of attending that festival and they are also great hosts.

Rllink said:
Not only is Jerry a talented Luthier, but he and his wife Jannelle host the Mighty Mo Ukulele Festival in New Haven, Mo. I had the pleasure of attending that festival and they are also great hosts.
Click to expand...

When you do decide to get uke #2 their instruments would make you very happy and you are supporting the community. I bet it would play E7 real well :biglaugh:
OP
OP

Checked the Mighty Mo website (http://www.mightymoukefest.com) -- looks pretty cool -- except it's no-go for 2015.

They were unable to reach an agreement with the conference center re available dates, plus the prices went up (apparently way up). I am extremely disappointed; I've gone three years in a row and always had a terrific time.

Yep, I got the e-mail yesterday. Too bad.

Thanks for the review, I've got a Boatpaddle on my wishlist
D

I am fortunate to own 2 Boat Paddles that I ordered thru Jerry (5 string concert Kayak cedar top, cocobolo b/s and a 5 string baritone cedar top narra b/s both have MISI pu's). Both excellent! The complete process contacting to build was as smoot as smooth can be. Highly recommended!
OP
OP

dsummers said:
I am fortunate to own 2 Boat Paddles that I ordered thru Jerry (5 string concert Kayak cedar top, cocobolo b/s and a 5 string baritone cedar top narra b/s both have MISI pu's). Both excellent! The complete process contacting to build was as smoot as smooth can be. Highly recommended!
Click to expand...

Glad I just checked in -- any pics of the cedar/narra Bari?
W

connor013 said:
When I received it I switched the strings to a re-entrant set
Click to expand...

I've never heard of people putting re-entrant strings on a baritone ukulele. Is this common? It is still tuned dGBE, correct?

The ukulele sounds WONDERFUL by the way!
OP
OP

Just a friendly bump to remind everyone of Jerry's good work.

Let me add my +1 for Jerry's craftmanship. I am the newish owner of this ML Tenor. Jerry was a pleasure to deal with throughout the design and ordering process.

Don't know what prompted me to check in on this thread, but man I'm glad I did -- that is one beautiful tenor.

I just bought an A-style custom tenor and for its workmanship and sound, it costs less than many other ukes of similar quality by other custom luthiers.

Pictures of my BP: 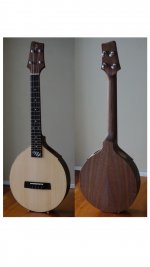