Anyone play button accordion? I looked at some on eBay with two rows of buttons on the left hand which I understood, but what are the eight buttons on the right hand side for? Chords I suppose. Can anyone explain?

I’m semi-interested in them. ld:

I've dabbled.
I still own one.
DBA's, Diatonic Button Accordions, or in the British Isles, melodion has melody notes on the right and bass notes on the left.
Melody notes are different on the push and pull.
The French like tow rows, one in C major and one in G major, this is called a GC box.
Germans prefer and CF box.
English is usually DG?
Irish like BCs and less often DC#.
Cajon and French Canadians usually go one row, C ,G, or D DBAs.
Then there are infinite variations of DBA.

Keep in mind that there are Chromatic Button Accordions, usually full size with 5-6 melody rows on the right and 120 basses on the left.
The same note is played on the push and pull.
These too vary an almost infinite amount.

Melodeon net is the place to delve deeply.
http://forum.melodeon.net/index.php?PHPSESSID=dgb6ocv6rcek55jej44flgmsb1&

I see that you are in So Cal.
I've got an old Hohner Master Supertone you could have cheap.
Needs a new bellows.
This is it;

http://davesaccordion.com/
Is local in Atwater Village just off the 5, north of down town LA.
He often has a DBA, but most of his accordions are Piano, or PA accordions.
He is a great teacher, btw.

Accordions like ukuleles, have a tendency to breed. Just sayin'. Having been down that path myself, it's best to buy one that's fully functional. There are so many moving parts and so many ways for it to break down, it will probably cost more to repair. For that reason, eBay is not the best route. But one sometimes takes that risk and discovers" what they say," is true. Not that it happened to me. LOL

Following what Maki66 says, he just covered the two row gamut. There's the one row that's used for Cajun. The three row for Mexican music. That's just the diatonic variety. Diatonic - think harmonica. In and out produce different notes. Right hand plays the melody. Left hand has the chords. So you have to learn to coordinate both sides. Then there's your tone preference. Dry tuning versus wet tuning. I prefer wet where the tones mush together like in French accordion music. Dry tuning I think of sounds more like a piccolo. Piercing, high-pitched.

So the type of accordion you procure would have to do with the type of music you want to play. French, Irish, German, Acadian, British, Mexican and that's only a start. It's not exactly a self-taught deal so it would make sense to find a group you can play with and learn Tunes. I had a Hohner Corso I recently sold. I got it to play French music. Once the ukulele bit, and other circumstances arrived, I unloaded my accordions.

Well, thanks for the info, everyone, but the BA sounds like more than I wanna deal with. I’m havin’ enough trouble with All my stringed instruments. I already play too many, and I’m self taught on all of ‘em.

Thanks again but no thanks. ld:

It's very easy to spread yourself too thin.
So that's probably a wise choice.
Progress on any one instrument requires lots of time and dedication.
Jumping around is fun, but it's a path that doesn't lead to mastery.

That’s all right. I’m too old for mastery. Just havin’ a good time is enough. ld: 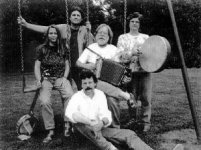 I used to play a lot more Irish trad music than I do now and played a C/G box. I'm ashamed to admit that I have neglected it lately as I'm playing other genres of music lately.
Above is a PR photo of a group called Late For Dinner (You can't call us anything you want, but you can call us Late For Dinner )from before the turn of the century. That's me on the little red Hohner button box.

The button accordion was my mom's favorite musical instrument. I remember as a child how she played for me and even tried to teach me lol.
I never learned to play it, but its sound always evokes fond memories. 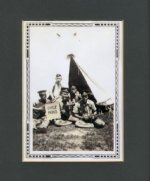 This photo is from about 1943. My dad, Harold Yates is the guy in the middle playing the button accordion. I have no idea where this was taken or who his friends are, but the photo hangs on my back room wall. There are also a guitar and a banjolele in the photo.
A

One of the members of our uke group plays something smaller than what's in the photos. Don't know what it's called but she's really good - the fills & leads she plays really adds to the sound.

Another member who occasionally shows up is an excellent steel guitar player. Not too many of them around!

I had been looking at getting a squeeze box, as it has close to harmonica sounds, just louder, but I couldn't co-ordinate my hands on piano, so decided to give it a miss too.

I'll stick with my wind blown instruments, & one day get back to playing my ukes, maybe.

I took piano accordion lessons when I was 7 to 10 years old. I still have a 48 bass Hohner that my son bought me.
I also own a 2 row C/G Hohner button box and a Trinity College English concertina.

The English concertina is chromatic and has the same note on the push and the pull. I tried the Anglo, which has different notes on the push and pull and is diatonic, but it didn't seem to make sense. 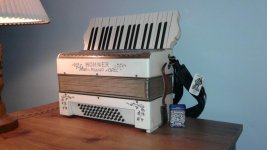 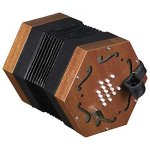 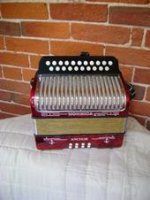 I play a little bit of concertina. It's diatonic, different notes on same button for push and pull. It really plays a lot like a harmonica. I can play several tunes on it, and get it out every so often just so I don't forget how to do it. I think my favorite tune to play is "A-Rovin" just like in Moby Dick. https://youtu.be/iuOGkY2dNOg But, if it's alright with you lot, I think I'll keep my head.

Wow! Thank you for all the Info. I have had a similar curiosity for years. I bought a full size accordion and got a German polka teacher to give my mom lessons. The teacher was great and my mother took to it really quickly I thought. Then one day she just gave it up, she said it hurt to play. I offered to get a small button accordion for her but she had no more interest. I was a little disappointed! My curiosity remained though, so I thank you all for the education about button accordions!
You must log in or register to reply here.
Share:
Facebook Twitter Reddit Pinterest Tumblr WhatsApp Email Share Link
Community platform by XenForo® © 2010-2021 XenForo Ltd.