I've wanted to compare these two sopranino pineapples for a while now, ever since I first noticed the Kiwaya line last year (there is also an -01 double bout version). Some differences between them:
Both are currently fitted with fluorocarbon strings (stock KFC for Kiwaya, M600 on the Ohana, stock is the ubiquitous Aquila), set up similarly (about 0.5 at 1 and 2.25 mm at 12) and are tuned gCEA (a benefit of sopranino over the smaller sopranissimo, IMO). Seems like slightly more tension on the Ohana; not saying the Kiwaya is floppy, but someone else might. Intonation is good up the neck on both, nice sustain as well.

Both sound good, really good considering their size. Keep in mind I'm mostly a picker. When I first got the Ohana I thought it was infinitely better sounding than the smaller double bout O'nino that I had. Between these two, some days I think the Kiwaya sounds better, others the Ohana... they are very close to my untrained ear. Perhaps a touch more volume and bass to the Ohana, but I think the edge for sound goes to the Kiwaya because more often I feel the Ohana has that small instrument sound, less so for the Kiwaya. YMMV, of course. Can't say I'm surprised by the laminate though; I had a KSU-1L that sounded great.

The Kiwaya definitely wins on playability due to the wider nut and spacings, even with the slightly shorter scale. It just feels more like a bigger uke and fretting is cleaner (still easy to cheat on chord shapes though). Sometimes I think the body of the Kiwaya feels too deep/thick for such a small uke, but the difference in depth is only a couple of mm (yet it's also within a couple of mm of my Kala KA-15s).

The downside is the Kiwaya is currently difficult to find; not sure it’s even sold in the US. There are smaller and cheaper alternatives, but I would avoid those if valuing sound over size or if you do not want to tune up (like me)... i.e., I think this sopranino size is as small as you can get without it sounding like a toy. These two are both good choices, although the better playability gives the nod to the Kiwaya. 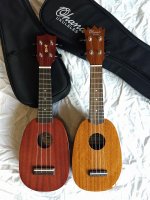 Great review, thanks for sharing that! The Kiwaya's darker woods and crown headstock shape appeal more to me, very classy and traditional.
M