Do you "name" your ukulele?

Hope this isn't too frivolous of a topic, but I've seen a few people here refer to their ukes' names. Just wondering how y'all come up with one. While my new ukulele is supposed to be an inanimate object, it seems to be very much alive as it sings to me and moves me and I find myself longing to spend time with it. (Yeah, I've gone totally over the edge now!)

How do you know if it's a boy or girl? I have a Mainland Mahogany Tenor, which I associate with a male (not to mention that in my mind, it's closely associated to Mike's smiling bearded face since I got it from him in person!), but my Kamaka is a soprano, which I would normally consider a female. But I always refer to it as the "old man" since I've had it for over 30 years. The Gecko soprano is a bright purple which I'm inclined to see as female.

How can I know?

And what has the ukulele done to me that I'm even posting this!?!

Yes , I have around 15 ? ukes and they are all named ukulele except for two which are named banjo ukulele.

I don't name or genderize my ukuleles, but I have noticed that when men give theirs a gender, it's usually female. I think some guys also do that with cars and boats and guns. I haven't noticed female players making their ukuleles male. I have no interpretations of this, as I did not go past Psych. 101. To me, it seems even more complicated than learning the notes on the fretboard. However, I'm pretty sure that to figure out if the ukulele is male or female, you have to look around inside the soundhole.

No, not much point in naming them. None of them seem to want to come when I call them, anyway.

My first solid wood uke had a model name, Jenny. I've been naming my ukes ever since. (My husband names his ukes mainly to humor me.)

In addition to Jenny, I have Angie, Daphne, Mary Jane, and Blue Cat; all concerts. My tenors are BJ and Beachelele. (My rarely-played soprano is called the Black Applause.)

My husband's ukes are Jethro, Zeke, and The Applause; all tenors. (His rarely-played soprano is called the Red Applause.)

Don't name my ukes or my cars or my shirts. The ukes have a name - Collings Tenor Re-entrant, Kanile'a Super Tenor, Lanikai 6-string Tenor, etc. I guess if I were to get multiple ukes of a certain type, I would either have to extend those names (with wood type, etc.), but my goal is to not go there.

I do name my dogs, who come when called. When a uke can do that, I'll give it a name.

I guess I name mine. Well they came with names: Howlett, Koaloha, Moore Bettah...

I do not own more than one uke per builder/manufacuter though. I don't think I would name them anyway.

I'm not one of those who are in the naming camp. I call them by their brand name and/or size.

I'm not one to name inanimate objects (I have a hard enough time choosing names for my pets!), but I got curious about this since there's a long tradition of naming guitars so I'm guessing the tendency to name ukes is a crossover from that. I don't have that many ukes, so referring to them as "the custom," "the pineapple," and "the concert uke" has always worked for me. One of my ukes has a Feb 14 manufacturing date, and a couple of friends have christened it Valentine - which I think is kinda cute but it wouldn't have occurred to me on my own.

What I can't wrap my head around is when people refer to their ukes in conversation by name, e.g. when a fellow uker says that she "couldn't bring Lulu" to our uke group meeting or that "Josephine needed to stay home tonight." I try not to judge, but - come on, this is just weird

janeray1940 said:
What I can't wrap my head around is when people refer to their ukes in conversation by name, e.g. when a fellow uker says that she "couldn't bring Lulu" to our uke group meeting or that "Josephine needed to stay home tonight." I try not to judge, but - come on, this is just weird
Click to expand...

Some of mine have names, and some of them don't. Of the ones with names, some have regular names (Emily or George, for example), some have names that are not regular names (Yocto or Meerkat, for example), and some have names that are more like titles (The McLaren). Now that I think of it, the newer ones don't have names at all. I've heard that some people think that sopranos and smaller ukes are female, while tenor and baritones are male, with concerts going on a case-by-base basis. In any event, even though some have names, with the exception of The McLaren I never open a case thinking, "I'm going play Emily"; I open the case thinking, "I'm going to play the KoAloha super concert", or whatever.

Of the hundred or so ukuleles that we have collected and owned, I have named only one. The Graziano Baritone Ukulele that is my current and only performance instrument. I named it Ella...

I usually never name an instrument but I bought a Sailor uke a while back because the logo is the same as the one my dad (WWII navy vet) used to have on his forearm. It was named after him. Thankfully it was a relatively generic name 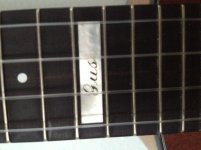 During the few months where I owned 2 ukes, I called them "my ukulele" (my main player) and "my other ukulele" (which I rarely played.) Nobody has ever accused me of being overly imaginative.

I don't bother naming anything that can't come when I call it...
P

janeray1940 said:
What I can't wrap my head around is when people refer to their ukes in conversation by name, e.g. when a fellow uker says that she "couldn't bring Lulu" to our uke group meeting or that "Josephine needed to stay home tonight." I try not to judge, but - come on, this is just weird
Click to expand...

I just realized I named the ukes I loved, and not the ones I didn't. Their names and/or gender just were something I felt, like an inspiration I guess.

And I've had 2 friends, one a musician and the other who was just cool, who knew the ukes' names and referred to them in conversation. But then, I've been naming instruments I loved for a long time, not just ukes. And at the moment none have names, because I have no uke.

Naming them is not about them coming when you call. If they do that, I'm outa here! It's about connection, at least for me.

DaveY said:
However, I'm pretty sure that to figure out if the ukulele is male or female, you have to look around inside the soundhole.
Click to expand...

I think it's kinda fun to name inanimate objects. My motorcycle is Charlene and I always pat her on the tank and thank her for getting me home.