Douglas Fir as a top wood?

Recently picked up a Kelali baritone uke with a Douglas Fir top. I have been impressed with the tone, very warm, nice clear trebles, great volume.


I'm wondering why we don't see many instruments made with Fir? 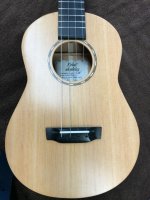 M3Ukulele said:
Good point Hodge. I agree this sounds great. I’ve never seen many Douglas fir tops but certainly would consider it on a ukulele.

I’m sure it has more to do with builder using what they have always used. I guess Douglas Fir must be a softwood so it makes sense that it sounds good.

I’m going to look up DF on a wood database and see which soundboard suppliers have it for sale.

Thanks for sharing and bringing this up.
Click to expand...

Oregon Wild Wood Tonewood has some Fir listed. They like it too.

There are a handful of Beansprout ukes with Fir tops too. Aaron seems to like it. I wouldn't mind a fir-topped baritone myself.
D

Doc_J said:
I'm wondering why we don't see many instruments made with Fir?
Click to expand...

Because it wasn't what was used in the instruments that were popular at the beginning of the ukulele's mainstream success, and those woods which were popular early have dominated the market. I think that's really the only reason. The instrument wood market is pretty tightly focused on what has worked in the past. The "experimenters" using odd stuff are usually either small makers (like Beansprout) who have a low enough volume that they can get enough of a supply of whatever they want despite the market, or large makers who are using alternative woods for some specific purpose (marketing or economical) and have enough sway over suppliers that they can get what they want. Otherwise, everyone just sticks to what has always been used.

This produces a hierarchy where the most commonly used woods are the woods that were used most commonly in the past and it's hard for woods on lower tiers of popularity to become more popular. Unfortunately I don't think the hierarchy really accounts for actual tonal/structural properties at all. There are a lot of woods in the less popular category that are great performers. Fir among them. But to a certain extent, you can really build a good sounding ukulele from a huge variety of wood species, so there's often really no motivation for big brand makers to switch unless they are forced to.

So, basically, what it boils down to is that you don't see a lot of fir because it is hard to get a good supply of acceptable fir - because fir trees aren't really targeted for use in instruments. For a top, you really want quartersawn wood free from defects (pin knots, runout, twist etc) with tight ring spacing. For hardwoods this isn't so critical, but for a softwood like fir, it becomes pretty important - it's hard to make a top from flat sawn softwood and have it turn out nicely, because the stiffness and other characteristics just aren't there. This basically puts builders in a position where they have to be picky about their softwood tops. And this requisite picky-ness means that there's a sort of self-sustaining cycle where some softwoods are easy to get in instrument-quality lumber and some aren't - just based on what has been popular in the past, and not really based on what is actually suitable.

Sawyers will go looking for a red spruce tree big and straight enough to work for guitars, but they don't do that for fir. A lot of softwoods are grown and harvested for construction lumber, where they don't really care about growth ring spacing or small knots. Those tree farming methods produce a really high volume of lumber but don't really produce instrument-quality wood. A species like fir that's used almost exclusively as construction lumber is rarely if ever harvested in bulk outside these methods - so there just really isn't much quality, stiff, quartersawn fir around. To get the instrument quality wood, a sawyer has to go looking for it - which they only do for species that are already popular, like red spruce or sitka spruce or red cedar, etc. So for a species like douglas fir, there isn't much of a supply of the right stuff.

Kala or Martin could go out tomorrow and work with their suppliers to start getting a supply of fir, and then switch all their spruce-topped models to fir, but there's really no reason for them to do that. Manufacturers use what's available to them in the right volume at the right price, and what they're familiar with. This creates a perception in the marketplace that those woods are "the best" from a tone or structural perspective. The popular woods are certainly good - but that doesn't meant that unpopular woods aren't good as well.
C

Doc_J said:
...I'm wondering why we don't see many instruments made with Fir?...
Click to expand...

I remembering reading/hearing that cedar is hard to work with because it is soft and marks easily; I wonder if douglas fir is softer than cedar? Also, cedar tops dings more easily and really needs binding to protect it; so I wonder if doulas fir might need even more for long term performance?

I don't know much about wood, and it'll be interesting to read the responses to this thread.
C

Many African and Asian relatives of popular woods already being used like African mahogany. I think instrument makers are constantly looking for cheaper (but equivalent) woods to use. Was sepele as popular as it is now like 10-20 years ago? I think as the well-known woods become less available, the less popular woods are going to take their places.

Dwizum makes good points about the market-driven nature of tonewood supply. Koa and mahogany are the traditional ukulele woods and remain extremely popular, even though the supply of koa and true mahogany is pretty tight. Douglas fir is available in great abundance, just not as tonewood.
D

clear said:
Many African and Asian relatives of popular woods already being used like African mahogany. I think instrument makers are constantly looking for cheaper (but equivalent) woods to use. Was sepele as popular as it is now like 10-20 years ago? I think as the well-known woods become less available, the less popular woods are going to take their places.
Click to expand...

You're right - that's basically what I was trying to say here:

"or large makers who are using alternative woods for some specific purpose (marketing or economical) and have enough sway over suppliers that they can get what they want."

The lesson of the day is, manufacturers are making choices by balancing economics with marketing pressure. If a traditional species starts to see price increases because the supply is being used up, manufacturers will pressure suppliers to provide alternatives that still pass the "I can market this" test.

The trick here is to read between the lines - manufacturers aren't choosing wood based purely on tone or structural characteristics. They don't go looking for the best tonewood and then try to find a way to buy it and sell it. Instead, they find stuff which they can buy and sell and that also happens to be an acceptable tonewood. The implication is that there are a LOT of great wood species out there that could make awesome tonewoods, but aren't really mainstream - because they're either not economical to buy at the right quality and scale, or they're "weird" or "different" visually or in some other way that makes them harder to market. It usually has nothing to do with whether or not they're actually good for use in instruments. Douglas fir hits both of those issues. It's hard to get in the right quality, and it suffers from a bit of an image problem - when people hear "doug fir" they think of mundane things like 2 x 4's at home depot, or Christmas trees, which makes it a little hard to market as an instrument wood.
You must log in or register to reply here.
Share:
Facebook Twitter Reddit Pinterest Tumblr WhatsApp Email Share Link
Community platform by XenForo® © 2010-2021 XenForo Ltd.