I gave my new harmonica holder to the guitar player in our band, as I just couldn’t get it to fit comfortably. All kinds of adjustments, but it was just too tall in the front, so I tried my old, modified Hohner rack and it fits perfectly. It probably doesn't help that I have 7 fused vertebrae in my neck... 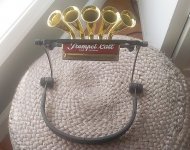 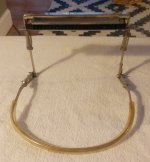 My rack, bought in the early sixties, is an Elton. When I bought it, I was trying to learn some Jimmy Reed songs, so I bent itto hit my mouth at right angles the way Jimmy did. Another mod I've made over the years is to add lock washers to stop in slipping mid-tune.
In the late seventies I lost this rack, and tried a few other racks, but none suited me as well. It seems that no music store had eever heard of Elton racks, but was able to find another one at a flea market a couple of years later.
Soon after I got a call from my ex-wife saying that she was selling all her LPs and converting to CDs. She said that I should come over and see if there were any that I wanted. When I got there she said, "Oh, I found this behind the hutch. Do you want it?" It was my first old Elton rack. 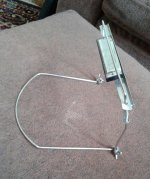 My first rack I bent out of a coat hanger. Not long after, I bought one similar to your Elton, but am pretty sure it was sold by Hohner. You can barely see in this pic of the "Back Porch Pickers" around '68... 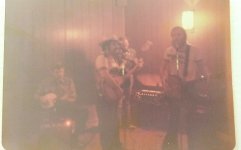 I just googled harmonica holders and found no Eltons, as used by Jimmy Reed, Woody Guthrie, Jesse Fuller, Patrick Sky, Bob Dylan, Donovan, Willie P. Bennett. . ., but this one looks like the very same thing and it's mighty cheap.
https://www.reidmusic.com/products/profile-fully-adjustable-harmonica-holder

I like how they call it "fully adjustable" even though you can only move it forward and back. I added two frame "corner braces" to my old Hohner rack about 20 years ago, and have since replaced them with a couple of stainless steel straps. It adds a lot of adjustability...