How do you abuse your ukulele?

I was lucky enough to win a Kala concert (laminate) in a contest about three years ago now. It has basically lived in the trunk of my car since then. It gets quite hot where I live, yet every time I pull it out to play it, at the beach, or the parking lot, it has been ready to go.
I keep hearing horror stories about warping or glue failure but so far so good.
I do *not* recommend this behavior, just sharing my experience. Having an extra ukulele around at all times is wonderful. Once even Kimo Hussey played it and it sounded better than I have ever heard it.

My point is musical instruments are pretty tough. I have had a Pono for ten years that is my gig ukulele. It has done lots of traveling and played many outdoor events, in full sun, and even a light rain. And heavy rain (UWC 2011) but was quickly wiped down and put away. Just care for and ENJOY your ukulele and it will be OK.
2

I've wondered this myself. But people have many different lifestyles, and that is as it should be. For me, the worse my uke is subjected to... is my songwriting attempts. Most turn out well and that's a relief. But the writing time--let's just say I would not want to be the uke at that point!

My playing is abuse enough, let alone leaving my ukes to rot in the weather....
S

I keep my ukes locked in a dark case except when they are servicing my personal needs. I allow them no input on the TV shows that are playing in the background. I and I alone choose the music that we play together. I'm amazed I haven't been arrested yet!

Seasons. I have played right through the tops of a Baritone Kala and an Ohana vita...but I had fun doing it. Took five years and at least a song a day
W

I try not to, with one exception they live in their cases when not being played. My Kanilea sits on its stand, beside my desk, waiting to be grabbed and played. I constantly think of parting with it as it is a poor fit for me. However its the one I grab for stress relief and problem solving. If not keeping it in its case when not actually playing is abuse... 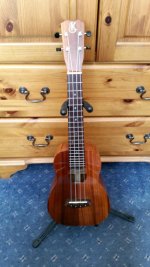 In that the Eddy-Finn concert has a large side port, it is very easy to drain out any water which might get in it while in my single-double or triple kayak. I still stash it behind the seat in a plastic garbage bag. It is nice to not have to worry as I did when taking a wooden one. The longer necks on my all composite 4 or 5 string banjos won't fit behind the seat in the single, but I will need to check the space in the double/
B

My solid koa Martin C1k hasn't seen any extended use out-of-doors nor would I say it has been abused. But there are some who might say I abuse it by leaving it laying on or propped up against my sofa all year long. It's there to be played when ever I get the urge, which is often. And, yes, I've dropped the laptop on it. I've knocked it against the coffee table. I've banged it up against walls, accidentally of course. Thankfully, I've not spilled my tea on it.

It never sees the inside of a gig bag unless I am traveling or going to my neighbor's to give a lesson. I live in a relatively mild climate and the humidity is fairly consistent in the house. When I change the strings, which is probably twice a year, I slather the entire uke in Howard's Feed-n-Wax.

So maybe some would consider this uke-abuse but my uke is no worse for the care, or lack of, I give it. And the little dings and scrapes it has acquired are a testament to the joy it has given me.

The ones I have in regular use are left out on stands. I wouldn't play them otherwise. I keep an Alic soprano (plastic body, laminate top) in the car but conditions here are not as extreme as some of you folks over there experience. The car can still get pretty warm in summer though. I give them an occasional wipe to remove finger dust from under the strings.
You must log in or register to reply here.
Share:
Facebook Twitter Reddit Pinterest Tumblr WhatsApp Email Share Link
Community platform by XenForo® © 2010-2021 XenForo Ltd.