Are you talking of ones in playable shape, or does this include project instruments underway as well as yet to be begun? Does it include mandolins strung as a uke or a balalaika or a cavaquino?

TheCraftedCow said:
Are you talking of ones in playable shape, or does this include project instruments underway as well as yet to be begun? Does it include mandolins strung as a uke or a balalaika or a cavaquino?
Click to expand...

It can be whatever you want it to be. It is your response, so go ahead and own it.

I have never had more than two... But I do have another one coming from HMS, and those take a while. Maybe I should sell one before the new one comes in, so I can still say I have only had two?

Just dont ask me how many guitars I have.

I posted this in another thread today, but its just as relevant here.

Okay, I have to surrender my smugness. I doubled my count this weekend in one short door prize drawing. My wife and I attended the Fall Great Minnesota Uke Gathering and we both won Waterman ukuleles. My wife won a teal colored glow in the dark, and I won a clear plastic which will soon be filled with Christmas tree lights. So I am up to four now. My wife, who has never played the ukulele but is quite musical, has already mastered up the C, the F, the G, and the G7, and she is belting out songs at a phenomenal rate. She is just going through the books. I want to add that the festival was fantastic, I learned a lot from the Jim D'Ville workshops, and I met one of our UU stalwarts, Choirguy. We sat out off the hotel lobby, talked and jammed until after eleven last night, and it was so much fun. And while I came home with two more ukuleles than I arrived with, I was able to control myself in the room with all the vendors. It wasn't easy. There was plenty of ukuleles in there that caught my eye. In fact, I went there hoping that maybe I might find a particular ukulele that I had been thinking about, only for find it, play it, and decide that I didn't want it near as much as I thought that I had.
Last edited: Nov 21, 2016

UkieOkie said:
I have 11 now. I have given five away, if memory serves. So I believe I have owned 16 or so. Of the current 11, they all get played quite a bit. There are five of us and we all play. My wife is my assistant in the uke class I teach at our homeschool co-op. She started playing along with the kids and is now hooked too.
Click to expand... 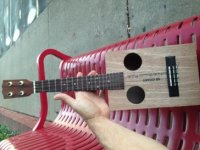 UkieOkie said:
I made another cigar box Uke this week. So make that 17 total with 12 currently. ;-). I tuned it to D tuning.