In Praise of Cheap Ukes

SweetWaterBlue said:
While we are on this subject, has anyone ever played one of the cheap azz Johnson or Excel ($38 at my local Dirt Cheep Music store) baritones? They are as cheap or cheaper than the Makalas, and I am trying to fight off the siren-call of that Makala as long as I can.
Click to expand...

You might try the rogue bari from musicians friend. $29.99 shipped. I'm tempted to get one myself, especially since trying to play my classical guitar over Christmas break. (I could only use 4 strings).
H

I love my vintage Brüko best sounding instrument I have and it only cost me 30 euros for the uke itself and 7,50 for the strings (martin fluoro)

mine is a Kala soprano. sounds good and was about $75 total on ebay

My first uke purchase after learning on a borrowed cheap Mahalo, was a Makala MK-T. I put Aquila's on it and it sounded great. This weekend my wife and I were in at The Thin Man in Alameda and she bought a Kala KA-C for me for $79.00. The Aquila's it comes with new are still stretching. The Kala is now my fav and I've passed the Makala Tenor to my wife
I would love to have a nicely set up Makala Dolphin and a Pineapple uke.
DAP
H

by far my fave cheap uke is a Mahalo Les Paul copy. Cost me $65. Perfect (yep, believe it foilks) intonation.

The aquilas give it a real sweet and rich tone, great volume and one of the best sounding ukes I have. Very happy with it and it gets played all the time.

SamWise said:
I have a Kala Watermelon that I won in Deach's MmmBop contest. Aside from being a proud trophy, it's my go-anywhere uke. I mean, I have good cases for my better ukes, so I don't mind taking them on the road, but if I'm going camping, or to the beach, it's the Watermelon. It's also the uke that lives on the sofa/floor, which my 2 year old son will strum, which my wife has learned a few chord on, visitors plunk on, and I pick up and play when I'm passing, so it gets a lot of use. I've made videos with it too. It's not my favourite uke, but I like it a lot, and I'm glad to have it.
Click to expand...


I have a Kala watermelon too and it is a giant hit with kids. I took it to my daughter's second grade music class and everyone kind of squealed in delight when they saw it. My daughter proudly proclaims, "My Mom can play a watermelon!" It sounds pretty good too, although I must admit, I use it only for the novelty factor, not when I want the best sound.

This is my cheapo uke...
http://www.ukuleleunderground.com/forum/showthread.php?41464-Reno-RU-150-BLK-Soprano
W

Here's another one for the Lanikai LU-21p. Nothin' wrong with a beater.

I decided to resurrect this old thread rather than start a new one.

So my son calls me and wants to know what cheap uke to buy. It seems that when our grandson starts to cry, our son will let him strum (of sorts because he is only 7 months old) his guitar he stops crying. But it is a steel string guitar so he wants a smaller nylon string ukulele. Now I have no delusions of grandeur that a 7 month old has any possibility of actually playing a ukulele. So a I told our son that I would get him one.

Took a drive to Island Bazaar in Huntington Beach (great shop) to pick one up. Ended up with a Makala Dolphin. My wife picked out the color and I did the quick sound, fretboard, string height, intonation once over.

Once home, I took out the nut files and got everything pretty close at the lower frets. The string height at the 12th was 2.5mm so did nothing to the saddle height. Obviously not perfect intonation but pretty good.

I am pretty amazed at what $50 of ukulele can sound like, even with stock strings. It is really fun to play. Over the years I have tried a few cheap ukes that sounded horrible and were almost unplayable. Not this one. And to be honest they all sounded basically the same. My once over was to eliminate any that had buzzing (high fret) or overly high strings, which is why it is best to actually play the one you are going to buy.

As for spending all this time setting up a uke for a 7 month old. It is really for our son. My hope, hopefully not delusions if grandeur, is that our son will start to fiddle around on it and get hooked. So I want it to be as playable as possible. It may mean more trips to Island Bazaar, but that is fine with me.

I love my Lanikai LU11

Early on in my uke days I was very fond of Oscar Schmidt instruments. I had multiple OU2 and OU3 concert models, all under $100.

I still think these are fine ukes, but they are very sturdily built and tend not to project terribly well.

In the intervening years I've had some nice vintage ukes, some other higher-end expensive brands and a custom-made Beltona.

Currently I own 4 ukes...in no particular order:

1. Woods brand baritone. A gift from a friend. These are no longer made but I think they could be had for about $70 on Amazon when available. Cheap, mass-produced Asian uke, but really not bad at all. Very easy to play. Nice, mellow tone. Very lightweight.

2. Mitchell MU70 concert uke. Aside from the bridge, headstock shape and logo, identical to the Oscar Schmidt OU3. This one, though, has significantly more volume and sustain than the OU3s I've owned. I got it used with a nice case from Guitar Center for $70. I think they list for $99 new, without case.

3. Gretsch G9100 soprano. $99 new from a local shop. Very impressive uke IMO, even not taking the cost into consideration.

4. No-name El Cheapo Japanese soprano I bought in 2000 on eBay. I know that all-in it cost me no more than $15. It's been through a flood. Still going strong with a bit of elbow grease, glue, new tuners and new set of Martin strings. It is ugly as sin (may refinish it someday, or strip it at least) but it's the one I play most, would never part with. My entire family and many friends have played on it. It's traveled with me through parts of Europe and to every corner of the USA.

I love cheapies. The past decade or two, improvements in mass production have brought about a golden era of inexpensive, very decent and highly consistent instruments. When I first began playing guitar in the 70s, and through the early 90s, many (most?) Asian budget instruments verged on being unplayable junk.

None of my ukes will ever be mistaken for a vintage Martin or a high-end brand, or a luthier-built, heirloom quality instrument. But I really am content to let others own and enjoy those.

My cheap ukes may not be as intrinsically "good" or "valuable" as many pricier ukes, but I derive every bit as much pleasure from my cheapies as I ever did from ukes that cost me many times more. And spending $800 on an instrument never made me a better player.
T

Just plain good playing fun are the Eddy Finn sopranos in 5 different colors--1of which is mahogany back and sides and a spruce color top .The minimum advertised price is $35 but as long as one does not advertise it, the company doesn't care if one gives them away, so some sell them below MAP.

The concert thin bodyTraveler is probably the best bang for the buck at 112.00 MAP, but some do not advertise and just reply by Private Messages to find prices on things.

I havn't received it yet but here's the total for my new Dolphin that's hopefully shipping soon. I couldn't believe the price! (USD)
Here in Canada we pay $70 Canadian with the tax. $100 if you try to buy it off Amazon.ca. Plus I was told it already has Aquila Nylgut installed! 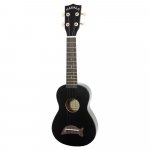 Can't wait to try it.

Here's a video of the Rogue baritone from a couple of years back...cheapest there is, and I absolutely love it. Got a Rogue soprano too. Stone funky.

Here's a video of the Rogue baritone from a couple of years back...cheapest there is, and I absolutely love it. Got a Rogue soprano too. Stone funky.
Click to expand...

Whoa! Such tasty playing. Just beautiful. You make it seem effortless. That style is right up my alley too (though I sure can't pull off anything approaching what you did there.)

Just goes to show, to large degree, it's the magician; not the wand.

I'm new to this uke thing (guitarist)....thrilled and pleasantly surprised that my $91 Kala KA SLNG sounds so darn sweet. Love it!

Griffis said:
Whoa! Such tasty playing. Just beautiful. You make it seem effortless. That style is right up my alley too (though I sure can't pull off anything approaching what you did there.)

Just goes to show, to large degree, it's the magician; not the wand.

The best sound to dollar ratio I've ever achieved was probably the 2 Lanaiki LU-21 concerts that I bought as gambler's specials from Butler Music. After some setup work they sounded amazing. I gave one to my brother-in-law and sold the other.
You must log in or register to reply here.
Share:
Facebook Twitter Reddit Pinterest Tumblr WhatsApp Email Share Link
Community platform by XenForo® © 2010-2021 XenForo Ltd.