Hey All Uke Players-Just wondering what everyone prefers as far as tone woods go-(I know KOA is DA Bomb) I'm getting a batch of Moku Ukes in January (Both African Mahogany & Sitka Spruce tops)but wanted to know what everyone prefers for Tone woods. For the record I like the Sitka's tone-it's nice & bright -although the Mahogany does sound nice as well...
Thoughts ??

Coda: I will now go to my shelter and put on my flame retardent suit...

I think there's room in this world for all the colours and sounds of the tonewood rainbow.

African and Honduran mahogany are two different animals for sure. I don't care for African for tops and wouldn't use it for that. Sitka is always good.

There are a lot of woods to choose from in the world. And different combinations will give different sounds.
I prefer soft tops I think they give a more balanced sound. Just my:2cents:

mikemulqueen said:
Hey All Uke Players-Just wondering what everyone prefers as far as tone woods go-(I know KOA is DA Bomb) I'm getting a batch of Moku Ukes in January (Both African Mahogany & Sitka Spruce tops)but wanted to know what everyone prefers for Tone woods. For the record I like the Sitka's tone-it's nice & bright -although the Mahogany does sound nice as well...
Thoughts ??
Click to expand...

Koa is nice.....don't know about "da bomb" It's become the stereotypical "wood of choice" for what is perceived to be a "Hawaiian Instrument." Note all the quotes. Not sure if Koa is listed very highly on the world list of great tonewoods. It does give more of a "Hawaiian" sound and if that is your ideal, then it is "da bomb" to you and that's okay. It's just an opinion, nothing more. Trashing other tonewoods, to me, is a kind of "uke snobbery" that is similar to the anti-uke snobbery we criticize some guitar players for. A beautiful sounding uke is just that, regardless of tone wood. If I want that Hawaiian sound, I'll get a Hawaiian sounding uke (I have a Koa tenor) There are a lot of more "sustainable" great tonewoods out there. I love Koa, but I'm a uke lover first and will endeavor never to claim my "preferences" are better than yours. If it gives you the sound you love, go for it. Plenty of open minded ukers out there to buy them.

Open mind? Yeah I've got one of those that respects tradition. Spruce topping a very small instrument always changes its original characteristics hence my remark about guitarists. My harp uke design, because it has to cope with a wide range of frequencies is spruce topped,- those sub bass notes would be weak on a hardwood top. I also think that because the ukulele is a Hawaiian instrument it has earned the right to 'own' the traditionally accepted koa crown. I would very humbly suggest that spruce top instruments cater for a modern player who expects the more complex sound architecture created by this tonewood and driven, over the last 30 years by boutique guitar builders who have defined a vernacular for luthiers that embraces this wood. Sadly ukulele makers also buy into this stuff - best guitar I ever played was a red soruce top 1950's Martin 0018. The grain count per inch was 8 - 5 across the lower bout and it was wavey!!! No self respecting luthier today would use such a wood and yet this guitar had the most incredible projection and tone... from my experience playing many instruments pre war (both I and II), post war and modern, I'd say that ukulele luthiers today by the very nature using 'new' wood combinations are totally redefining the idea of that 'ukulele sound'.

Myself, I just finished a walnut and German spruce tenor that I’m in love with. It is just so bright and clear. Then again I also love the African mahogany tenor I made last year. The first koa tenor I made sounded like total doggy poo, but the one I completed for myself this past summer is da bomb! For traditional sound, nothing comes close to my koa soprano except for my Honduran Mahogany soprano.
Last edited: Nov 17, 2011

I am a spruce top player. my two main ukes are stika spruce, and I have Mahogany ones too. depends on my mood.
I see it like this. People that like spruce tops are not traditional uke players (Being broad here) they tend to play more recent songs (1950-present). The people that like the Koa, mahogany tops seem to be more ragtime or hawaiian music players.
Now cedar top players are just confused

The "tradition" with ukes is to use local wood. Koa just happens to be local in the Hawaiian Islands.

With our tenors, I am very deliberately going for a more "guitar-like" tone as well as feel. I'm trying to win guitar players over to uke; that's my central market target. As it is, a number of uke-centric players like the instruments, too, but I make no bones about the fact that I'm trying to appeal to guitar players with a big and warm sound. Our new concert ukes are much more traditional sounding, though not traditional looking. I prefer to let the Hawaiian builders have their thing, and we'll do ours here.

And that means I do like spruce for tops, and we usually use Adirondack.
M

Thanks for the input!!

Thanks for the input everyone!! It's all definitely helpful to know what everyones really liking as far as Tone woods go-The Koa Grade is definitely not as nice as it used to be,I definielty am going to be experimenting with Cedar,Spruce,Quilted MAple,etc. Wish I could get my hands on some Braziliian Rosewood:drool:

Only one of my clients has ever asked for a hard wood top....surprising to me.

It's been either cedar or spruce for the custom builds. And even the spec instruments sell better with a soft wood top. Different market place perhaps. I've had some people call up and ask if I've got anything with that "Hawaiian sound". I try to be polite and usually tell them I got a few kicking around that have "my sound". I'm not Hawaiian, and don't profess to build a uke that sounds like one. It might just by chance or luck.

Like Rick essentially said. I'm not trying to steel away the Hawaiian uke market. They do their thing, and I'll do mine. If it happens to be the thing your looking for, then that's fantastic. If not, I'm sure that there are other luthiers out there that will be able to fit the bill and there is no ill feelings between colleagues over such matters.

I couldn't really say that I have a preference....though for my style of building Red Spruce really ticks a lot of the box's for me. It just doesn't get that much attention in Australia as it does in the USA though.

I guess it's because I picked up the guitar at an early age but I like the sound of spruce or cedar over most hardwoods for the top. I do like the sound of a mahogany top though. I'm sure it's just a matter of dialing in the thickness of the top and braces and the feathering of the edges to get the other hardwoods to perform the way I like... comes with time.

Pete Howlett said:
Open mind? Yeah I've got one of those that respects tradition..... I'd say that.... luthiers today by the very nature using 'new' wood combinations are totally redefining the idea of ....'sound'.
Click to expand... 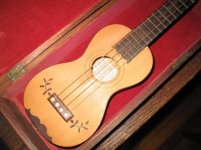 I have to agree with Pete here. Above is a photo of an instrument made by Nunes - Joao Nunes, that is - made in Portugal around 1870. This is real tradition.

Apparently his son or grandson went to Hawaii, where they couldn't get proper spruce for their tops. They used something called koewah (spelling?). If you've never seen this stuff, it's darker and much harder than spruce - doesn't sound the same at all!

Not only that, a lot of those crazy islanders are using pieces of it that are full of a twisty, curvy kind of grain. What an abomination! Of course this is a fairly recent phenomenon - only the past 100 years or so.

I think a lot of people are just mesmerized by visions of swaying grass skirts. To me this is just a flash in the pan. A fad that will quickly pass. I can't really see this lasts more than another 100 years. Then maybe people will come to their senses and get back to traditional materials again.
Last edited: Dec 9, 2011
You must log in or register to reply here.
Share:
Facebook Twitter Reddit Pinterest Tumblr WhatsApp Email Share Link
Community platform by XenForo® © 2010-2021 XenForo Ltd.