I've just installed a MISI/Baggs pickup in a tenor at my customers request.
The MISI has been installed exactly per the instructions, even down to the slight angle on the bottom of the (correctly fitting) saddle, and the slight extension of the end of the transducer into the end of the slot. The saddle slot was cut with an end mill in a milling machine and the bottom is as flat as the flattest thing you can think of.

However, despite all that the string balance is not brilliant, with an overly dominant C string and overly quiet A.

I normally use the Shadow SH-1110UK bar type piezo, and am well used to having to compensate for an overloud C string by shaving a thou or two from the bottom of the saddle below that string.

I've tried that solution with the MISI and now have slightly better balance between the G, C and E but the A is still weak. Before I take this approach further grateful for any advice! Wondering if a different approach is needed with the cable type transducer.
Last edited: Jun 28, 2021

You didn’t mention the type of saddle material you used. One that is of consistent density (ei: not bone) is important. You might try flipping your existing saddle and see what happens.

Thanks Chuck - it's bone. I may have some corian stashed away somewhere though. I'll try reversing the saddle to see what happens, but as it is compensated for individual strings it wont be a permanent solution.

I have experienced this "unbalanced" string situation previously also. I shared my situation with a local repair guy and here is the advice he offered me. He told me to try putting a very slight chamfer on the two bottom edges of the saddle. I mentioned that the saddle was snug in the slot but not to the point it was difficult to place it in the slot. He suspected the sides of the saddle might be getting hung up and not seating all the way down. To my surprise this slight chamfer allowed the saddle to sit all the way down and bingo, the A string was as loud as the rest. Not sure if this is your issue but it worked for me.
L

I'm also occasionally challenged by the unbalanced string problem. Mostly people coming to me and asking for help rather than with instruments I produce.

Here's what I do:
Firstly, if it's a G string or an A string that's unbalanced I check the width of the saddle slot. If the saddle slot pinches the saddle at any point, the saddle won't vibrate consistently along its length. Generally the end strings have this problem. The saddle should be tight enough so it doesn't fall out when you tip the instrument upside down but easy enough to remove and insert with your fingers.
If that's not the problem, my next solution is to get a piece of that very thin, tough, clear plastic they use on the front of shirt boxes. Cut a slice that's the same length but about 1mm narrower than the saddle slot. Put it flat in the bottom of the slot then the saddle on top. That has sorted the problem for me quite a few times.

It can be incredibly frustrating fixing these issues but as we all know "If it was easy, everybody would be doing it."
Hope this helps someone, someday
Miguel

Thanks for the suggestions everyone - plenty to go at!

This can be hellish. I also file back the edges a little so the downward pressure is more in the center of the saddle. In a pinch if I have a weak string and all the others are good put a layer of thin CA on the bottom of the saddle under the weak string. Let it dry hard and file it or not as necessary.

I think the overall consensus is it's a 'seating' problem. We have had this issue and everything said above fixes it one way or another. If you like an interference fit for everything then under saddle pickups are not for you. Everything is nuanced when fitting an uspu and sliding fit is a hair away from a glide to a wobble.

1) Double checked the saddle - it is a perfect sliding fit with no tight spots, easily removed with the fingers but doesn't drop out with the uke inverted. I always put a slight bevel on the bottom edges, but I made these a little larger just in case. I also reverted to having the bottom of the saddle at 90 degrees to the sides rather than the slight angle advised in the MISI instructions. Bottom of saddle dead flat bar a slight relief under the C string as before. Finally I added a couple of layers of ultra thin metallic tape under the A string. Result? Absolutely no change!

2) The transducer cable was tending to slip back in the slot as the saddle was inserted, so I deepened the angled recess at the far end under the A string to make sure the transducer stayed put (the cable enters from the G side of the slot). Result? Absolutely no change!

2a) There was a black dot on the end of the cable as suggested above, but it was already on the top.

3) At this point I remembered I hadn't tried Chucks suggestion of reversing the saddle to see what happened Tried it, and lo and behold and frankly much to my surprise the balance markedly improved. It's still not what I would expect from a pickup costing 160 quid though.
This bug that deletes everything you write after a special character (in this case a pound sign) is absolutely maddening - I've lost several paragraphs of text
It isn't a solution for me as the saddle is heavily compensated to accommodate the plain C / wound G combination and the intonation is thrown out when reversed. I can't re-profile without losing too much saddle height and since I'm already down to 2 mm at the 12th due to the previous levelling and don't like using shims, I will make a new saddle. No point in using bone again, so have ordered a block of Corian from David Dyke.

4)There remains the nuclear option of drilling through at the A string end and reversing the transducer. However it was such a PITA to install in the first place I will wait for the new saddle. The transducer appears to have some sort of silicone coating which prevents any of my stock of tapes sticking to it except double sided carpet tape ... but that then sticks in the bridge hole .

Anyway, I'll get there eventually! Thanks again for your help.
Last edited: Jul 2, 2021
L

Thanks for posting all this detail. It's a great learning experience for us all.
Miguel

No, I didn't extend the hole in the far end right down through the top. only enough to retain the transducer end. It is angled, so no problem to drill right through, it's just the hassle of re-threading the transducer that puts me off for now. I should have added that the saddle does meet the 50/50 rule. The corian block arrived yesterday (thanks David Dyke for next day delivery) so hopefully later today I'll know if it works!

This was the installation this morning with the original bone saddle reversed: 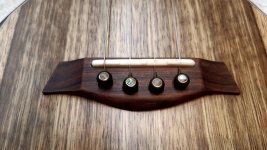 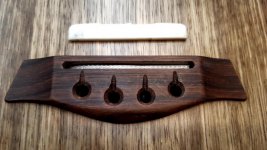 Update - corian saddle now installed (I had forgotten how easy it is to work with) and problem is essentially cured. The A is still a tad weak on the open string, but as soon as you move up the neck balance is good.

This was something of a revelation for me - I would never have thought saddle material could be an issue. Anyway thanks again for the help!
Last edited: Jul 4, 2021

Yep, never use bone when installing a UST. If you really need to, hold it up to a strong light and you can see the inconsistencies in densities and choose one that looks most solid. Like wood, bone varies a lot in it’s properties. I personally use Tusq. And your A string is weak because the the very end of the transducer is weak. That’s why you need to feed it through a second hole.
You must log in or register to reply here.
Share:
Facebook Twitter Reddit Pinterest Tumblr WhatsApp Email Share Link
Community platform by XenForo® © 2010-2021 XenForo Ltd.