I’m always amazed at how long Martin threads get. I’d like to seem them out I. The word “Koa pattern” pm the concert. The Tenor StreetMaster looks cool but agreemfretboard should be darker.....and I’m not sure on the graphtech tuners. I like the look. I want to like these tuner. So many bad reports. As pointed out.......Grover open back are likely a better option....but Gotoh UPT would be the ticket and offer this StreetMaster at $599.

The reality is ukuleles at Martin are not a priority or Martin. IMHO. They did SAVE the company.....Chris Martins words back in the day! Too bad they don’t innovate or at least try to build More, use mahogany or what ever and try to be in the K brands market. They have such a good name and brand recognition. Currently, I’d consider the StreetMaster when I can play one myself and I’ll keep an open mind but would much rather buy this Martin with UPT’s straight from the factory.


Also, IMHO, Martin should be selling them Uke dealer and bypass the guitar dealers. nice to hear MIM has then. Support MIM.

One gripe I have about Martin ukes is the cheap quality wood they use for their bridges. They aren't finished. The grain is loose and compresses easily. And it looks terrible. Especially against a dark body.

I got my 1T IZ tenor at a nearby guitar shop. They got it directly from Martin in Nazareth. I decided to change the string after playing it for two weeks. And I was shocked to see that the factory strings had compressed deep grooves into the tie bar bridge. It's raw, unfinished rosewood. But the quality is awful. I love the uke otherwise.

I did apply a little Music Nomad Fret One to it to darken it up a bit. It looks slightly better.

I thought I had read that Martin had responded to complaints about their shoddy bridges and was using a better grade of wood. But they still look cheap in recent photos for a $1600 tenor. This photo was taken after I applied the Fret One oil, but before I restrung the uke. I put a piece of C-String under the wrapped strings, and it seems to help minimize the grooves. I've never had another tenor with this bad a bridge problem. Especially one this new. 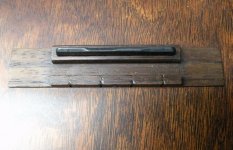 I agree with the comment about the bridges. . The bridges on their new ukuleles look really bad in comparison to the rest of the uke.
The new 5k's bridge looks terrible , not the bridge for a very expensive uke.
Last edited: Apr 4, 2021

I always hoped that Martin would release a concert OXK. Would anyone who has one post a sound sample?
B

I bought an OXK and returned it the same day. Volume was very low. The sound wasn’t very nice at all. I think my outdoor carbon sounds much better and the frets were sticking out passed the fretboard so bad it was unplayable.

Blank Williams said:
Anybody else see these? I was hoping they would come out with something new.

Have any others here tried the new OXK concert?
B

I just checked this sound sample

It has tenor-like sound, even guitar-like to my ears for such a small body

I actually quite liked the tone

But I could also tell that some people will not like it at all
Last edited: May 15, 2021
E

The video reminded me of my Enya HPL concert sound. Better or Worse? I don't play mine often so I don't know. It just sounds about the same to me.
M

Ed1 said:
The video reminded me of my Enya HPL concert sound. Better or Worse? I don't play mine often so I don't know. It just sounds about the same to me.
Click to expand...

Kenn2018…. Agreed on the bridges being shoddy on!artins. A big company like that should not offer anything that poor at that price.

I like the Concert HPL………..the print of Koa looks good. I have played Enya HPL and it’s quiet so I’d have to play the Martin concert. I’d really like a tenor but could do the concert if I liked it. I wish there was product in my area. I’m in the hinterland with only a million population….ha ha ha.

Old like to try the Street Master tenor first. Has anyone got one yet or even played.one at a dealer. I find the sound sample on line…..the few that are on line don’t sound that good to my ears…………could be the recording or just the hard strumming.
You must log in or register to reply here.
Share:
Facebook Twitter Reddit Pinterest Tumblr WhatsApp Email Share Link
Community platform by XenForo® © 2010-2021 XenForo Ltd.