Yep, even though the market seems unwilling to clear out my closet of other ukes, a new Mya-Moe is in progress!

I doubt you're as excited as I am, but just in case, here's the tracker (no pics just yet):

Some of that nifty chocolate stripe myrtle in a longneck soprano, with a few extra custom bits.

Checked out the specs---sounds like you'll be receiving a beautiful ukulele soon. And knowing Mya-Moe, it will sound beautiful as well. Congrats!

That should get yer fire going! Congrats on the new uke!

Aloha Chap,
Congratulations on your Mya Moe build...just wondering why you chose myrtle???

Curious on the all myrtle myself.

Nice xmas present to yourself there. Congrats !

Why myrtle? Well, it's in the middle of the warm-to-bright meter, it's native NW wood, and I am a NW boy stuck in Chicago, and last but not least, it's a beautiful piece of wood! 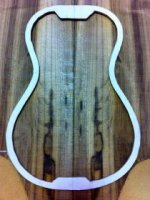 In addition to the listed specs, I am having them shorten the fretboard a bit. This is because I never play past the 14th, and I think it looks better.

Congratulations! That's a beautiful set of myrtle. I like the chocolate grain along the lower bout. The specs for your uke suggest it will be a beauty. I'm curious about why you chose the high gloss finish.

I've gotten the same question about choosing myrtle. When I spoke with Char at the Wine Country Ukulele Festival, I explained that because I already had a Kamaka HF-3, I'd only want to spend the money for a custom ukulele if it had a different sound to it. She had a myrtle tenor there (the infamous #500) and what I liked about it was that it had a noticeably brighter tone than my Kamaka tenor. I also like the fact that myrtle is a west coast wood (I'm in California), is sustainable (unlike koa, apparently), and that it's Gordon's favorite wood, and one of the reasons to buy a custom, in my view, is because you like the sound aesthetics of the builder(s).
Last edited: Nov 4, 2011

Hey Chap - looks like a beauty! Since this is turning into a MM love-thread here, here's the wood for MY myrtle concert that will start in March They're going to shave 1/4" off the middle of each side to clear the little dark knots leaving milk chocolate stripeys. 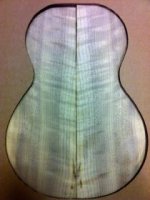 I'm really impressed with the tone of my MM myrtle. I had a KoAloha and while I was pleased with the beauty and mellow tone, I hear terrific balance and clarity in the myrtle. I have a koa and redwood tenor resonator in the works, #549, and I'm hoping the mellow nature of those two woods will mesh well with the forward sound of the resonator to gimme that woody reso tone I'm looking for.

Enjoy watching the build! It's so much fun following the progress.

This is one of the other choices I have for my wood and the more I look at it the more I like this one... Is it always this hard to choose? 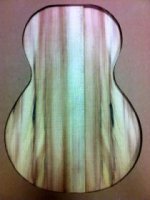 marymac said:
This is one of the other choices I have for my wood and the more I look at it the more I like this one... Is it always this hard to choose?

Wow, Mary, that's going to be a hard choice. I love my MM myrtle super soprano tradition (#418) that I've had for over 6 months. The wood is lighter and much more subtle but has such depth to it. But I also absolutely love my chocolate heart mango tenor classic (#268) that I've had for 16 months now.

Anxious to hear which one you choose.
H

they build lovely instruments don't they. yours looks as though it will be pretty special Chap.

Now I having second thoughts. I selected the gloss finish for the durability, since I'm fairly sure this uke is going to have me pounding on it constantly.

But now their comments on it affecting the tone is making me waffle. Convince me either way?
H

Chap said:
Now I having second thoughts. I selected the gloss finish for the durability, since I'm fairly sure this uke is going to have me pounding on it constantly.

But now their comments on it affecting the tone is making me waffle. Convince me either way?
Click to expand...

na, don't worry about it mate. they don't like doing the gloss finishes because they are fiddly, time consuming and because of all the chemicals involved. Gordon did mention the gloss finish may be removed as an option next year.

There is also the maintenance of the equipment for them to consider...they don't do many gloss finishes and in Gordon's words, "the equipment likes to be used"

From my own experience, I have a MM with a gloss finish - number 455 - a sycamore concert scale uke. It sounds unbelievable. Gordon says it's the best sounding concert they've built thus far. I would order a gloss finish without hesitation based on this one.

That said, there are issues re the gloss finish...that the volume may be slightly muted, that the neck won't be as 'fast' to play... all things to weigh up in your final decision. For looks and durability, I think it is a good option but it's all personal preference in the end, eh?
H

just thinking...Chuck Moore does lots of gloss finishes on his uke masterpieces doesn't he???? haven't heard too many complain about the sound of his creations he he...

Okay, okay. You convinced me not to change it out.

So is this your second or your third? I remember the resonator from last year. Congrats.


Chap said:
Why myrtle? Well, it's in the middle of the warm-to-bright meter, it's native NW wood, and I am a NW boy stuck in Chicago, and last but not least, it's a beautiful piece of wood!
View attachment 29626
Click to expand...