New uke… and a little disappointment

I can't tell you how difficult it is to find a Kiwaya KS-5 in the UK right now. A couple of shops have the KS-5G in stock, the one with guitar-style tuners, but at the price of these things I'd rather not have to fit my own pegs and leave screw holes in the back of the headstock.

Imagine my delight, then, to discover a KS-5 listed online at JG Windows, mistakenly labelled as a double bass sound post (albeit a sound post made of koa laminate and fitted with Gotoh tuners…). It arrived the day after they sent it and it's gorgeous. Absolutely beautiful. Light and well finished, chimes like fairy bells and barks like a cannon. The strings are still settling in of course, but even so they seem to be holding tuning reasonably well. I think the intonation is OK too.

And then I noticed something: it looks like the neck is off-centre.

Looking at the back of the body the grain is dead straight and the body looks symmetrical, but it's as if the neck has been attached roughly half an inch to the left of centre. It's noticeable from the front, with more space showing on the left of the upper bout, but it is a little less obvious than from the back. I'm truly surprised to see a Kiwaya with any sort of flaw, especially something like this. What I'm wondering is this: does it matter?

Yes, it's a visual fault I could do without, but I'm hoping that someone with more experience can advise as to whether there may be problems ahead. Are the settling strings likely to be covering up future issues? or is it a minor thing I should be able to live with that won't affect the sound?

I've seen ukes like this in a lot of different price ranges. So long as the bridge is lined up with the neck I do not think it matters. There are all sorts of shapes of acoustic instruments, many which are not equal on both sides. It sounds like you're happy with the sound and all.

I currently have a KS-1G as my only uke. I like the gears. On the previous one I had, I installed some myself. I know that's a matter of taste though. On my current one, the grain runs at a bit of an angle but doesn't bother me. It's a fine instrument.

That sounds quite excessive to me. I am having a hard time envisioning the neck being that far off center without a number of other things being out of whack. Is the bridge centered, and do the strings follow the fretboard? It is possible to have it built like that and not effect the sound or playability greatly. I would suggest taking a number of other measurements to verify what is going on.
Brad

Good suggestions, thank you. I'll check a few measurements and angles in the morning and see how things lie.
G

This seems like the sort of thing you can easily measure with a ruler. It is possible the neck is dead straight on and it is a weird optical illusion. I'd be curious about the answer.

That sounds like a lot. I have seen many instruments where he bridge has been moved a bit, to line up with the neck but never where the neck is installed off center.

"Pictures or it didn't happen"
M

Are the strings centered on the soundhole and on the bridge? If they are it may be ok. Though may be worthwhile to contact Kiwaya and see what they think about it.

I'm going to take some better pictures later, with the uke on a gridded cutting board that I think will show the issue more clearly, but you can see the problem here: 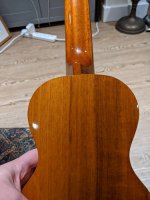 It's hard to tell. To me, the heel of the neck seems to be off. IE: It looks like the neck wasn't carved correctly and the heel is not symmetrical. But that can be camera angle and lens distortion. You'd have to ensure that the camera was perfectly centered and the uke absolutely straight to be sure.

How did it look against the grid on the cutting mat?

Ok your post caused me to take a closer look at my Kanilea tenor.
Oh boy, the alignment on mine is actually worse than your's!
Does it bother me? Not really.

But it makes me wonder - is this "normal" for handcrafted instruments, even those that are over $1000?

kissing said:
Ok your post caused me to take a closer look at my Kanilea tenor.
Oh boy, the alignment on mine is actually worse than your's!
Does it bother me? Not really.

But it makes me wonder - is this "normal" for handcrafted instruments, even those that are over $1000?
Click to expand...

I'm not seeing a major issue with the Kanile'a. Yes, the neck is a bit off-center from the connection point of the two back pieces but it's very minor in my opinion. I had a Kanile'a concert which I've since sold but I remember very clearly that the neck was positioned almost exactly like in your photo, i.e., slightly off from where the two back pieces meet. I have other ukes like that as well. I don't feel it's a major issue at all if it even is an issue in the first place.

That said, the OP's Kiwaya seems to have its neck much more off-center. It's a bit harder to discern from the photo since the back is one piece instead of two but it does look to be positioned massively to one side. I would not be happy about that myself either. If it were me I'd actually want to contact Kiwaya directly and ask them about it but since it's a Japanese company I have my doubts how well they're able to communicate about the issue.

I've written to the shop where I bought it, so hopefully I'll hear back soon. In the meantime, for your viewing pleasure, a couple of photos showing the whole instrument: 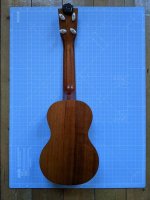 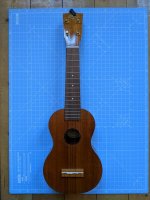 It's a gloss finish, so trying to balance lighting with minimal reflection isn't easy.

Judging from the photo of the front, it seems to me that the strings/fretboard/sound hole are in the correct relationship with each other.

You say it is gorgeous and you love the sound - that's what matters.

Myself, I'd be happy to accept it as it is.

Checked the intonation with several tuners (including that ugly black one ) of varying accuracy then compared with my other ukuleles, one of which is also a Kiwaya. It's definitely quite sharp at the 12th, particularly on the E and A strings. Possibly an issue with the strings (no branding with those: I thought they were fluorocarbon but they seem quite soft and I'm wondering if they're actually clear nylon) but given that my other Kiwaya has almost spot-on intonation I'm not convinced.

Waiting to hear back from the shop, but I think I'll be returning this if I don't want to spend all my time with it wondering whether every tiny off note is actually an inherent fault. Thanks for the suggestions and opinions.

BigJackBrass said:
Checked the intonation with several tuners (including that ugly black one ) of varying accuracy then compared with my other ukuleles, one of which is also a Kiwaya. It's definitely quite sharp at the 12th, particularly on the E and A strings. Possibly an issue with the strings (no branding with those: I thought they were fluorocarbon but they seem quite soft and I'm wondering if they're actually clear nylon) but given that my other Kiwaya has almost spot-on intonation I'm not convinced.

Waiting to hear back from the shop, but I think I'll be returning this if I don't want to spend all my time with it wondering whether every tiny off note is actually an inherent fault. Thanks for the suggestions and opinions.
Click to expand...

Stock strings on these laminate Kiwayas can vary quite a bit, or at least they have in the past. My own KS-5 came with what looked like D'Addario Titaniums but they were clearly thinner gauge than actual Titaniums. I'm fairly certain they were actually strings from a brand called Aranjuez who make guitar strings as well as some sort of nylon based ukulele strings. I didn't really care for them and quickly swapped them for fluorocarbons. If the intonation is a bit off I would guess yours has these Aranjuez nylon strings as well. I would definitely try fluorocarbons and check if that fixes the intonation issue. Of course, be sure to save the stock strings so you can put them back on if you want to return the uke to the shop.

If you're spending this much time thinking about it's problems, I'd return it. I had a variation of your issue once and finally returned the uke - and was happy I did. When I played it, I couldn't get past thinking about the issue I had with it although others might not have cared.

This is interesting. I've never noticed a Uke with that "problem." Looking at the pictures, my eye is more concerned about the apparent angle of the neck than it is the centering. The neck seems to angel off toward the 1st string a bit. Of course, the grain on the back accentuates that visual effect. This may be a Uke built on a Monday morning after a long weekend. But, if it sounds good and plays good, I'd keep it as it is. After all, it's your gyrating hips that everyone's going to be looking at anyway!