This little guy is a 2010 small-bodied soprano made by VT luthier Kevin Crossett: http://kepasaukulele.com/soprano.htm

It's solid mahogany throughout with considerably more bling than I'm used to. 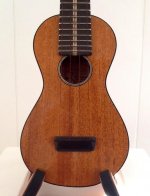 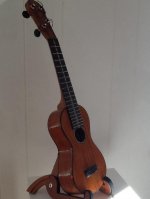 A bunch of cool things to note:

This uke has a 14" scale, which is a bit longer than most sopranos. It also has a slightly wider nut (1 7/16"). The effect -- which could be in part psychological -- is that it feels small but simultaneously roomy. It has a nice, low action; it frets easily; it's fast up the neck.

The neck joins at the 12th fret, but the board keeps going to the 19th. For me, this means I no longer have to guess at the c harmonic; otherwise, I haven't spent too much time up there. I can see how this would be really useful, though, for some players. The upper bout is narrow enough that it really isn't any trouble to fret over the body.

The saddle is compensated (buffalo horn); the intonation is right on all the way up the neck. (I know some of you get excited about this .)

The build is light and balanced and very cleanly done. (More pics to come.)

Overall, I'm pretty psyched about this uke. It has a little less bark than other hog sops (eg Timms, Favilla), but it's clear-toned and still percussive. I'll try to post a sound sample this evening after the kiddos go to bed.

Until then, cheers, UU.

Here are a few pics re: craftsmanship: 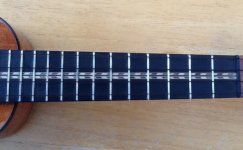 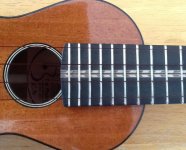 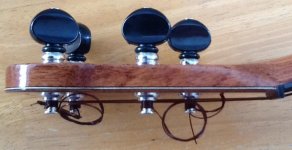 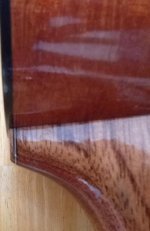 In case it isn't obvious: the workmanship is awesome.

Congrats! These are fine ukes...I have a maple body spruce top madiera and its a keeper!
Fyi: I found it sounds significantly louder if you play it standing up vs. sitting down. Lets hear it!

Congrats, Connor! That is a beauty, and so individual that you'll love it because there is no other like it.

Very nice! Don't leave that uke out in the cold.

Great grab! Those are cool little ukes. I've been keeping my eyes out for a Madeira. I hope yours is a keeper, but if you ever let it go send me a message. I tried for a week to convince Glenn to sell his, but he couls not be persuaded.

Where did you pick it up?
W

Kevin's ukes are the best. I've owned all three sizes, but unfortunately had to sell the Josephine soprano and the Gypsy tenor due to circumstances at the time.

I still have my Little Mac Concert which is the first Gypsy style uke ever made by Kepasa Ukulele.

Mitch -- I was just reminiscing about your Madeira, which I believe is now Glenn's, referenced above.

Wow. The fretboard and headstock are, in a word, badass. Very nice uke!
H

Hey Connor, you sure have an eye and ear for nice instruments. Congratulations mate, looking forward to your video with her. It's an absolute sweetheart.

Wow that is neat. Looking forward to your sound sample..

Congrats Connor. I have admired Kevin's ukes from afar for a long time. And let's hope that's it for the big snow storms for awhile!

Now you have a new uke to play while watching the parade today!

Before this review gets buried, here's a quick and dirty sound sample: https://soundcloud.com/user92796094/kepasa-madeira-worth-bms
I'm still learning Garage Band, so my apologies for the abrupt closing.

This was recorded in the kitchen, on an iPad, with no mics or effects, etc.

Having owned a couple of nice hog sopranos (Timms, Favilla) I think the Kepasa has a bit less bark and a bit more depth.

It's currently strung with Worth BMs, which I think are an OK choice. I'm going to order some SC mediums, and if I can keep my head on straight I'll post a comparison sample when I do.

I do believe that Kepasa ukes just moved to the top of my wish list! What an amazing sound!

Thanks for the sound sample. It has a real nice open ring. I dig it.
H