Pics of your group?

Some of us don't like being photographed, but the Ladies of Uke are hams. Here we are after an Irish Folk Song concert we performed for some residents of an ALF. The dog isn't ours, he was amazingly patient with the shenanigans he was put through!
Post your crew, if you feel up to it! 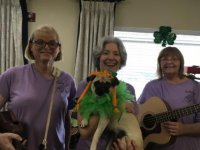 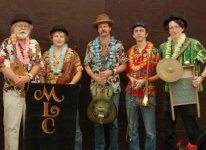 This is the Maple Leaf Champions Jug Band. I play a number of instruments with this group, but I found this one where I'm holding a ukulele. Since we're wearing leis, we must have just finished singing either Ukulele Lady or Let's Talk Dirty In Hawaiian, since these are the only songs where we wear leis.
Last edited: Mar 17, 2019

I like this thread. (Nicki, go back to your post above and add a 2 carriage returns between it! and the photo so it looks like this):


Nickie said:
Some of us don't like being photographed, but the Ladies of Uke are hams. Here we are after an Irish Folk Song concert we performed for some residents of an ALF. The dog isn't ours, he was amazingly patient with the shenanigans he was put through!

Post your crew, if you feel up to it!

My group, The CC Strummers out of the Culver City Senior Center, this is just over half of us. We meet every Monday afternoon and Thursday morning. 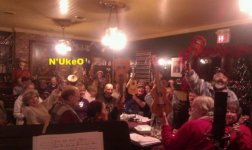 This is a photo of a group that meets in a Port Hope pub once a month. They call themselves N'UkeO (Northumberland Ukulele Orchestra). 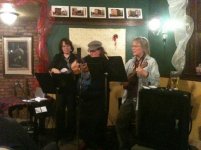 The Ukelillies are a Port Hope trio. Trish plays a uke-bass and Brenda and Margaret play ukuleles. Lovely harmonies.

Jim, very cool, I bet the ladies trio is some like ours.

Maybe more folks will get their group pics up here! 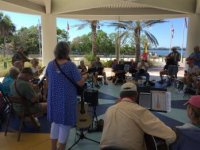 Here’s me with my group in Englewood. We get together every wed. am and play some easy songs. I call it the “”Cowboy Chord Club”.
Last edited: Mar 18, 2019

This was from our jam in January 2019. I'm smack dab in the middle, wearing the Ukulele Site t-shirt and grinning like an idiot. We were all dopey happy!

I like this thread. I wish that I had a group. 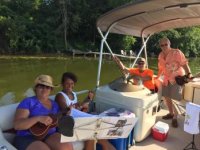 Just in case anyone believes that TBUS members are normal people, here's a shot from today's picnic. 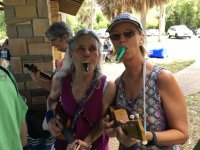 Being in a group is not for everyone but I’m very pleased to be part of one and some informal get togethers too.

Maybe Google mislead me but if not then there are Uke groups you could join in your area, and if I was mislead then forming a Uke group yourself is possible (maybe not easy but possible). I’m sure you could turn your wish into reality .

Edit. DMUS was what Google brought up for me but that’s a surprisingly long drive away from you :-( . Maybe they’re worth the occasional visit and perhaps they know of something in or nearer to Ames?
Last edited: Apr 1, 2019

The Raleigh Uke Jam, seen below at the Raleigh Night Market, a downtown street fair once monthly. It's about half our peak turnout for the regular jams we have at a local church twice monthly.

Great idea for a thread! 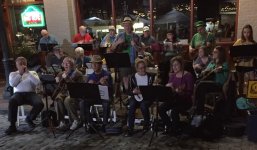 Bill1 said:
Do you need to produce proof of ownership of a Kazoo to join TBUS?
Click to expand...

No, Bill, but it certainly doesn't hurt. The weirder you are, the more we love you!
One of our elder members, who lives an hour away, started his own group called the Ukulele Orchestra of Tampa Bay. I wonder where he got the idea for that name???

Gonna bring up an old thread with a band I've been playing with for 10 years. I'm the old guy in the white hat... 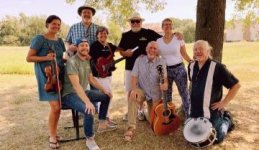 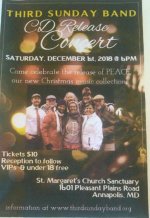 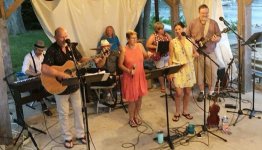 Here's two new pics of our group as it is now. Still called the Ladies of Uke. 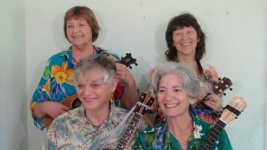 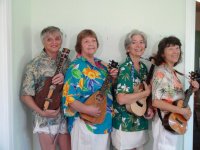 The C'Ukes group (Cobourg Ukuleles) a group of uke players who meet once a month. Here's a pre-COVID photo: 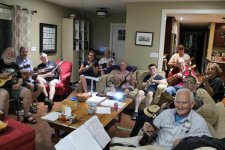 And a during COVID photo: 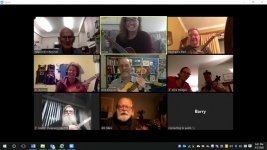 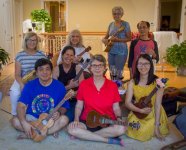 Here is our crew from before Covid. Maybe we'll get back together someday. I can only hope.

Here are a few photos of the San Francisco Ukulele Rebellion, a meetup group that met twice each month before the pandemic and has been meeting twice a month on Zoom since then.

In the first photo, we're performing at the California Academy of Sciences in January 2017, in front of a large aquarium. 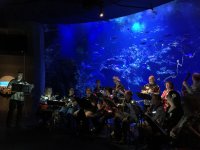 In the second photo, we're performing at the Centennial Celebration of the 1915 Pan-Pacific Expo, at the Palace of Fine Arts in San Francisco, the only structure left from that Expo. We played, among other songs, "On The Beach At Waikiki," the song that, when it was played at the Hawaii Pavilion at the 1915 Expo, launched a ukulele craze on the mainland. 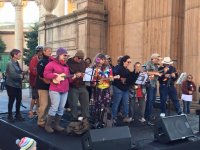 The third photo was taken at our Sixth Annual Caroling and Kazoo Giveaway Event in December 2017. 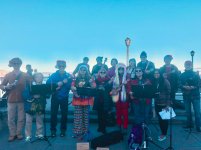