I used this video and the instructions in the package.

My fingers are sore from pulling and stretching! I didn't care for the Rumblers that came stock, they were sticky in some places and felt like they were crumbling or flaking.

Still don't have a great looking re-string job, but it will work. First time I had so many winds, they were wound back on themselves. I got them up to tune and partly stabilized and then, backed them off and tried to do it right, the A string still has more winds than I'd like. 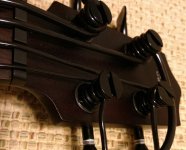 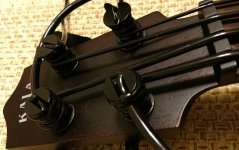 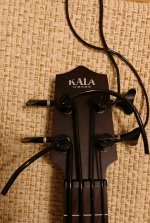 The Pahoehoes feel and sound a lot better than the Rumblers, I thought the tone with the Rumblers was inconsistent for each string...i.e. the E was real quiet, the G was loud and boomy.

Note: I noted the strings in ukulele tuning, oops! I actually tuned to GCEA the second time...haha. Before I took them off, I put a piece of tape on the strings at the first fret to make it easier to stretch almost to tune when putting them back on. Then I tuned to GCEA, I thought it was weird that the tape was pulling all the way to the nut, but thought it might have slipped or the strings stretched more? Then I checked intonation and played a C (3rd fret, 3rd string) and it was a D, it was then that I realized I had tuned it wrong! doh! :shaka:
it was late...;-D
Last edited: Mar 6, 2017

Definitely something to get used to. I've put Pahoehoes on most of my bass ukes a few times and stringing them doesn't get easier, but for me they sound a feel so much better than Thunderguts and Rumblers. Thunder Reds have been working for me on one bass after I powdered them once. I also have a set of the Kala round wound nylon core strings on a bass uke that are OK, but are on the noisy side from the windings.
Last edited: Apr 4, 2017

Mike, do these things ever quit stretching? Every time I play, it takes several turns of the tuner keys to retune.

I'm finding that they always need more turns than other strings. You'ill probably have to lop off some more after a while.
G

How long do Pahoehoes last? I recently got a 2012 vintage Kala Exotic Mahogany Ubass with Pahoehoes, They seem to be kind of flat? sounding sometimes?

If they sound flat to you, change them. I've had them on s few of my basses for about 3 years, they sound fine to me, but I rotate my basses often, so any one does not get played too often.

Yeah, it's just such a PIA! :biglaugh::smileybounce:

After playing the Rondo violin bass at a jam last week, I played my Kala this week at 2 jams, it sounds wonderful! :shaka:
I ordered a new set of strings, now I'm hesitant to change them, these old ones seem so stable. It's odd, though that now it sounds better than it did before, at least it seems so, maybe it's just the comparison.

So, I changed my strings...what a difference! I've only played at my house and the strings are new, but it seems to sound a lot better. The old strings were probably the originals from 2012.
J

I don't know if you saw this but there is one video of a guy who uses Vise Grips to hold the strings while he takes out the accumulated winds around the tuner. I will try to find it again.

JohnRC said:
Hi UkerDano, I don't know if you saw this but there is one video of a guy who uses Vise Grips to hold the strings while he takes out the accumulated winds around the tuner. I will try to find it again.
Click to expand...

I'd like to see that. I have to rewind the Pahoehoe strings on one of my solid body Rondo Hadean bass ukes and have been contemplating how to anchor the long end so I don't have to break my hands trying to stretch and make the first locking wrap. Right now I clamp down the body to my work table, then I thought I would add some kind of clamp to the head end of the table to hold the end of the strings.