I recently bought a Snail Rosewood Tenor Ukulele, and I am pleasantly surprised with it, it cost me £104 from Omega Music in the UK, these guys are fantastic to deal with and it arrived next day with free delivery,
Here's my short review

On opening the box, the uke was already virtually tuned and just needed a tweak for it to be bang on, the Aquila strings had already been stretched and holding a note well.

I have been playing this uke now for a while and it continues to impress me, it has a sweet voice not too bright but just about right, it also has a lovely bark when strummed with attitude, intonation is far better than a lot of higher priced ukuleles that I own.

It is a laminate ukulele, I bought it for that specific reason because I wanted a ukulele that I could take travelling that would not suffer too much with humidity issues, this fitted the bill, for a laminate the sustain is really good and it resonates very nicely thank you, there is also a bowed back to the uke which helps projection as well.

This ukulele delivers on looks, sound and cost and it will be in my pack always, it is a pretty uke with some nice purfling contrasting very well with the rich rosewood laminate, it may look a bit blingy or fancy for some but I love it, I have fitted a strap button for ease of play, it is a comfortable ukulele to hold, light for a laminate because the guys at Snail have managed a lovely thin soundboard and not overkilled the internal supports.

It claims to have a bone nut and saddle and as I have said it is lashed with Aquila strings and for me they compliment the uke well, the fretboard looks nice and is as usual rosewood, the neck feels really smooth and comfortable when playing, the headstock has the Snail logo carved out which is a nice touch, no transfer here to rub off the logo is there for the life of the instrument and is quite tasteful, but the intonation is really impressive, it is virtually spot on all the way up the neck, making the ukulele a real joy to play, I can't put it down, I love playing this instrument and I cannot speak highly enough about the ukulele as you probably already guessed.

If I had one complaint it would be that there is no side marker dots on the neck which I like on my ukes for fingerpicking purposes, but this is only a niggle and not a biggie, but I thought I would mention it, I have two slight niggles, the other one concerns the gig bag that Snail supplies for free

The free gig bag is not a bad quality gig bag to be fair, there is not much protection with it but it is a nice bag, it has a pocket on the front for picks and strings and feels pretty good quality, and it is one of the better free gig bags I have received with lower costing ukuleles, but here comes the gripe, the straps on the back are way to small for me to carry the uke anywhere, I wish they were a bit longer, but there again I am quite a big fellow.

I compared the Snail with a couple of my other ukes namely, My Pete Howlett Marmite Cherry Tenor and my Kala Solid Acacia Slothead Tenor, it performed well against these two ukes, the Marmite was obviously a bit better with projection and intonation, it was also a bit louder, note separation was also better on the Marmite, but the difference wasn't massive,
the Snail was more on a par with the Kala with the Kala slightly shading it for projection, the Kala had a warmer sound and this made the Snail sound a bit louder, note separation on the snail was better, but again this could be an effect of the warmer tones of the Kala.

The Snail cost a third and a half of the price of the marmite and was two and a half times less than the cost of the Kala, so it is punching well above its weight here guys, I would not like to chance taking either the Marmite or the Kala on my journeys, but the Snail should conquer all weather and humidity changes and also the world lol.

So to summarise
this uke is a bargain, I think Snail have hit the jackpot with it's current crop of ukuleles, if this one is anything to go by, they will be getting more business from me, so anyway, it can be taken anywhere in the world without much worry, it is an excellent price, the intonation is excellent, it sings very sweetly, it's quite loud, it's quite tough, it's very comfortable, it's light, it looks really sexy, it has a free gig bag and I LOVE IT!!!!

Thanx for taking the time to read my review folks!! 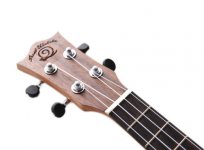 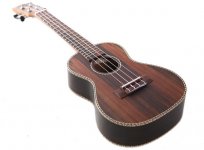 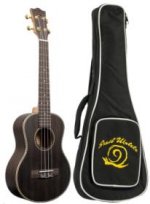 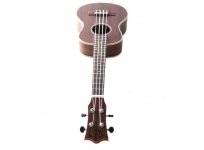 I loved the soprano version I had on test - good write up!

Thanks for the great review. These look nice.

For those across the pond like me, I remember the Elderly had them for sale as the Amahi Snail, in tenor scale for ~$169, but currently it's not listed on their inventory.

Any chance of a sound sample? pretty please!

bazmaz said:
I loved the soprano version I had on test - good write up!
Click to expand...

Thanks Baz, Heh Heh, it was your review that persuaded me to try the tenor version, I am bloody chuffed with the uke Baz, it is better than some solid ukes I own, I am well impressed mate, thanx for taking the time pal

Booli said:
Thanks for the great review. These look nice.

For those across the pond like me, I remember the Elderly had them for sale as the Amahi Snail, in tenor scale for ~$169, but currently it's not listed on their inventory.

Any chance of a sound sample? pretty please!
Click to expand...

Thanks Booli, I don't normally put up vids but if I got time toward the end of the week I will post one just for you mate, thanx for taking the time to read the review mate, ATB Kaizer

@Booli, I tried to film a sound sample for you, but unfortunately my cell phone doesn't do the ukulele justice, sorry Booli

kaizersoza said:
@Booli, I tried to film a sound sample for you, but unfortunately my cell phone doesn't do the ukulele justice, sorry Booli
Click to expand...