This took just as long a custom made instrument to be built, and as a matter of fact, I got to specify exactly what I wanted: it's Pono's UL six string model, but the first one with a slotted headstock, a sunburst cedar top, and a herringbone rosette.

Regular guitars have always felt too big for me, so discovering the uke with all its varieties was a great experience which has led me to explore the boundaries between the two instruments. The Pono UL is precisely such a crossover: It is made for steel strings just like an acoustic guitar, but with a scale length of 21.4", it is only slightly larger than a baritone ukulele. It can either be approached as an ultra short scale acoustic guitar or as a guitarlele/guilele with steel strings. According to Pono, they were inspired by Martin's Size 5 Parlor guitars of the old days.

It works well with regular guitar tuning (E-E) and it can be tuned up five steps like most guitaleles are (A-A), but it works best in between the two, what is traditionally referred to as Terz tuning (G-G). This is three steps up from a regular guitar, or two steps down from the typical ukulele tuning.

You cannot expect an instrument of this size to have the fullness of a dreadnought guitar, but to me, that is one of its qualities: regular guitars are not only to big, but also too loud and intimidating for me, whereas this one rings out nicely, but without the overpowering basses. Something about this size and scale produces a very sweet tone and chime-like sustain.

Playability is excellent with perfectly low action. Pono now uses a satin finished neck which is what many players prefer for faster sliding. The neck profile, I have to admit, is a bit too chunky for me, but nicely rounded. At 45 mm, the nut width is similar to many other acoustic guitars. In my opinion, they could have compensated for the reduced scale length with a slightly wider fretboard (~47 mm), leaving more vertical space for tight chord shapes like 002220 which do get a bit cramped at such a short scale.

Craftsmanship is absolutely impeccable, as on all Pono instruments I have owned and played. The sunburst finish is beautifully executed and shown off by a perfectly mirror-flat gloss. For the rosette, they have used herringbone on my request. I think it looks great and I hope they will incorporate it on more models as I much prefer it over their rope style rosettes.

Summing up this little review, I can say this is the guitar I always wanted: small enough to not feel like a piece of furniture on my lap, but large enough to fully resonate. After playing around with several different models, I would say that this UL model has the shortest scale to still work fine with steel strings. If you're looking for a high quality steel string guitalele, this is it.

I didn't get to take pictures of it, so I'm attaching the ones that were taken at the Ko'olau workshop on Hawaii. 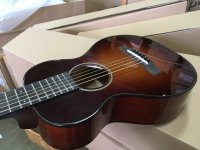 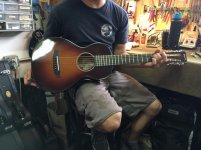 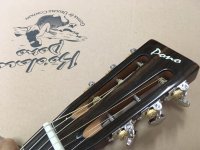 Very nice! There really is a sweetness to small scale guitars.

It’s interesting that you find the vertical spacing an issue as opposed to horizontal. I usually find horizontal to be more of an issue on a small scale, especially up high. Vertically, it’s similar to a regular steel string at 1 3/4” (as you mentioned)
B

Great review and wonderfully looking guitar! I'm glad they kept true to the parlor-ish design with a 12-fret neck/body join. 12-fret guitars just have that certain sweetness to them, IMHO.

That really is a lovely looking small guitar, I love sunbursts. I am glad you are so happy with it, it should keep you busy and thrilled for a long time to come
U

Thanks for the review. That is a gorgeous sunburst.

A lot of the smaller guitars are lower quality, I assume because the guitar companies are targeting kids, and/or beginners, so harder to find a high quality small guitar. And this one fits the niche for those looking for a higher quality small guitar. Although, with Ed Sheeran and Taylor Swift making it popular, the Baby Taylor and the Martin LX1 have opened up a smaller guitar market for decent quality travel / small guitars. And while those are certainly decent quality guitars, they are aimed at a level much below the Pono in quality, and price too.

And while some might prefer a wider neck width, this Pono guitar is slightly wider than std acoustic, but narrower than a classical. And actually, that is another thing that many small scale guitars have, and that is a very wide neck, which helps some with bigger fingers, but for others that want a small body acoustic, but not a classical width nut, this fits the bill too. So, I think this Pono is very nice guitar and certainly fits a niche very well.

With E-E tuning, the bass string is slightly floppy on this Pono, but it is still playable and acceptable. While some may prefer the sound at a different tuning, others may find it so much easier to be able to use std guitar tuning tabs/sheet music and not have to translate or play in a different key.

As of right now, there‘s a steel RC B6S listed there. They only come in spruce, understandably.

I really, really like my RC B6S that I bought over a year ago. I suspect I may come to love it in the years to come, if the spruce darkens over time.

I did not find the stock strings on the RC B6S floppy; rather just ever so slightly, barely softer (in tension) than whatever’s been on my Martin LX1 since 2004 or earlier. When the strings on either get replaced, I intend to replace them with Martin Marquis to maximally preserve the bridge holes & plate https://www.martinguitar.com/string...rquis-silked-guitar-strings-80-20-bronze.html.

You know Wukulele, I have been wondering the same thing ever since Romero Creations came up with their steel string versions of the baritone sized guilele. I think I will get one some day to find out, but only when they make one with a more interesting wood for sides and back (nothing against mahogany, it's just that I have a Romero TT6 in this wood and would like to see something different). I have asked Pepe about using Rosewood or Mango and he said that he might be offering this sometime in the future, but not now.

Rakelele said:
You know Wukulele, I have been wondering the same thing ever since Romero Creations came up with their steel string versions of the baritone sized guilele. I think I will get one some day to find out, but only when they make one with a more interesting wood for sides and back (nothing against mahogany, it's just that I have a Romero TT6 in this wood and would like to see something different). I have asked Pepe about using Rosewood or Mango and he said that he might be offering this sometime in the future, but not now.
Click to expand...

Bummer we’re on different continents. I sorta wish mine had almost anything but spruce for the top (personal preference).

If I were Pepe Jr.‘s position, I might be reluctant to expand on steel string B6’s. So much more tension. Steel string world seems so competitive. But there is an emptiness in the 30-32 inch overall length niche that I think there would be demand for (especially in Asia, where living spaces are smaller & small instruments are popular). It’s just a matter of time for copycats to surface… that’s another challenge.

I’ve looked for a steel string this size, stretching my criteria up to the 32” overall length Pono UL-6, but I have not seen anything on the market… Of course, it then made me take a look at Baby Collings & Santa Cruz Firefly, Sheeran by Lowden, etc. Thankfully, they all have overall lengths are longer than the Pono UL-6 & way longer than Romero B6. “Thankfully” because they’re 4-10x the price, lol.
J

I recently purchased a B6 in mango wood. Love the tone and playability.
Any suggestions on a hard case for the B6 with its 11" lower 8" upper bout. Most baritone size cases will not work. Maybe a smaller guitar case?
Thanks

jkib said:
I recently purchased a B6 in mango wood. Love the tone and playability.
Any suggestions on a hard case for the B6 with its 11" lower 8" upper bout. Most baritone size cases will not work. Maybe a smaller guitar case?
Thanks
Click to expand...

I have an old Martin LX1 that came in a soft case. That model is still production. It’s 34” overall length. There’s a hard case for it probably made by TKL. It’d be longer than 34” for sure. The best price I saw for it after a quick search was $200 from The Music Zoo or $215 from Eldery. I’ve had excellent experiences with both stores online.

Here’s my Romero Creations B6N balanced directly on the back of my Martin LX1.

I do not know of other guitars with long standing reputations with overall lengths shorter than the Martin LX1. And I’ve looked pretty hard. And always come back to Romero Creations or Pono (narrower than Romero, uses the Oahu Bari case).

Could also consider asking HMS/TUS… or Romero Creations directly? I bet there are others who have wanted a hard case for the B6.
(I would not trust what ULTP says based on some of their practices documented elsewhere on this forum)

Another thought…
The Kanile’a guileles tend to be quite wide, especially the lower bout. This random Kanile’a guilele on Reverb says it comes with some OEM (non-Kanile’a) hard case. Wonder what that one is?
I *think* the more recent Kanile’a guileles use a soft case with very similar construction as the Romero Creations B6 case. I’ve heard some claim they’re as good if not better than hard plywood cases. That said, if I wanted a hard top case for something, it’d be nearly impossible for me to be talked out of one. However, Romero soft cases seem carry-on friendly for majority of planes if staff is being reasonable, despite being just over 31, 32” . Not as sure about the Martin LX1 hard case’s carry on status, as it’s just under 40”.

I purchased a Luna baritone case that my B6 fits into. Kala also makes they're baritone model ABB case that I understand works as well but not easy to locate.

Rakelele said:
You know Wukulele, I have been wondering the same thing ever since Romero Creations came up with their steel string versions of the baritone sized guilele. I think I will get one some day to find out, but only when they make one with a more interesting wood for sides and back (nothing against mahogany, it's just that I have a Romero TT6 in this wood and would like to see something different). I have asked Pepe about using Rosewood or Mango and he said that he might be offering this sometime in the future, but not now.
Click to expand...

as of now, I would be cautious of RC 6-strings esp steel.

Wukulele said:
as of now, I would be cautious of RC 6-strings esp steel.
Click to expand...

Interesting, how so?
J