My lovely wife Susan surprised me a couple of days ago with a present. It is featured here in a song from 1936. Charlie Chaplin was late in entering the Talkies in his film making. He did add music and sound effects early on. In "Modern Times" you can hear some lovely old tunes and towards the end His voice is heard singing a song for the first time on the silver screen.

Here is a jazz standard written by Richard Rodgers and Lorenz Hart in 1937. This is my take on My Funny Valentine.

Iam off to the monthly jam session. Be back this evening.

What was the first song recorded on the Edison Phonograph?

Yes! I finally managed to make a seasons video for the first time in weeks : ) 'Am I Blue' written in 1929 - I tried out a low G string for the first time too and I have to say, I really like the sound of it (oh and excuse the silly hairdo! Just washed the hair and this is an attempt to stop it drying into a frizzy tangled mess )

IamNoMan said:
Iam off to the monthly jam session. Be back this evening.

What was the first song recorded on the Edison Phonograph?
Click to expand...

I think it was Mary Had a Little Lamb?

The Wilton Crawley Orchestra (with Jelly Roll Morton) recorded this in 1930. Leon Redbone did it 45 years later. I've done it too, but not outside when the temp was in the mid-40s and we had a half-inch of snow early the same morning! Also, just for you Tommy, it's played on my Ohana Vita uke, which is a tribute to the Roy Smeck model.

From the 1920s, performed by Annette Hanshaw and many others.

I used to drink heavily with a lot of the Irish boys in London around Willesden Green and 'County' Kilburn area, the pubs didn't open until 11 am but the 'cleaner' used to let us in at 7 am and take the money until the bar staff turned up ..........I had the mother of all hangovers with some bootleg 'Poitín' one Paddy's day ............If you're offered it don't touch it, you will go blind and it will put you flat on your a$$ !! lol
Last edited: Mar 12, 2017

It seems everybody enjoys this theme....so do I. My first entry-what else could it be-is a well known Blues

I'm not a staff member really...

This song, or something like it, was first recorded in 1932, when The Memphis Jug Band did "Bottle It Up and Go", probably based on something even older. Over the years it became "Bottle Up And Go", "Shake It Up and Go", "Got the Bottle Up and Go", and "Step It Up and Go", with new verses being written as it changed owners - including Sonny Boy Williamson, Tommy McLennan, Blind Boy Fuller, and John Lee Hooker. I have picked verses from here and there, so in years to come, music historians will assume that this is how it was performed in the Yorkshire Delta, c.2017

It's going to be fun. First a bit of research.Thanks for a good one!!

What was the first song recorded on the Edison Phonograph?


AlanDP said:
I think it was Mary Had a Little Lamb?
Click to expand...

Give the man kewpie doll. (What's a kewpie doll anyway)? Apparently Edison Sang this song when they were testing the equipment, didn't know it was recording and was surprised by it later.

It's a Charles A Tindley song 1916 but I heard it via a Blind Willie Johnson recording.

Back when I was a small child my grandmother thought I looked like the kewpie doll and gave me this bisque baby. I have cherished it.

Kewpie is a brand of dolls and figurines that were conceived as comic strip characters by cartoonist Rose O'Neill. The illustrated cartoons, appearing as baby cupid characters, began to gain popularity after the publication of O'Neill's comic strips in 1909, and O'Neill began to illustrate and sell paper doll versions of the Kewpies. The characters were first produced as bisque dolls in Waltershausen, Germany, beginning in 1912, and became extremely popular in the early 20th century. 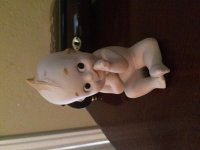 It's kind of an original Tommy.
About a style of music that started back then that, despite rolling in its sadness and depression, is still alive and well ...

Thanks for the explanation Linda. I always enjoy learning new things.

Try this tongue twister on for size.