so i've been playing guitar since 1987 and over the years owned loads of different types of guitars as my whims have come and gone. Yesterday however I found a guitar i had totally forgotten about in the attic a 1950's toy plastic guitar with original box and strings...

i know i have an auto-chord box that attaches to the neck too but it's not in the pic. it has 4 strings but all of which are wire - anyone know anything more about these?

are they 1950's?
this one is branded 'skiffle' and it say's 'made in britain 'but were there other similar guitar out there?
how do you tune one of these? i can seem to get anything close to uke tuning out of it so do i tune like a baritone guitar?
it's almost certainly wasted on me - is this of interest to anyone? would happily part ex for a tenor uke ( i'm based in the uk) Never seen one before. Looks fantastic!

If only I had the cash to hook you up.
H

What an amazing thing to find. If it were mine I wouldn't part with it.

I think it might be a tenor guitar. They were normally tuned CGDA. 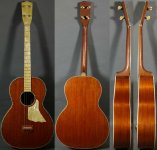 Looks more like a baritone uke with a 19 or 21" scale. Tenor guitars usually have a 25" scale. Tune it DGBE like a guitar.

Skiffle was a music type popular in Britain in the late 50s-early 60s. Lonnie Donegan was one of its main performers. John Lennon and later Paul McCartney began playing in skiffle groups. Skiffle died out pretty much as a music form by the mid-60s, although American jug band music continued some of its style.

The autochord was used on Arthur Godfrey's baritone ukes, which I believe were also plastic, so I suspect it's more likely a rebranded baritone than a guitar.
OP
OP
T

thanks for the info! looks like you are right about the DGBE tuning but the 60 year old guitar strings have no stretch in them at all! very hard to tune indeed i still have this... anyone fancy it?
OP
OP
T