Hello all! I’m looking for ideas for steel string baritones. I know of the Pono offering but was wanting to know of others as well - hoping they have narrower nut widths than the common 1.5” nylon strung baritones.

I have the Kala Tenor guitar, which is an amazing instrument for the price they ask for these, but the body is just a tad too big for my liking. The scale length is ok, but I would prefer more of the classic 20”-ish length, with smaller baritone body. Actually, I think the Pono is more along the scale length of the Kala Tenor...

Anyways, what else is out there that I don’t know about? Thanks!

The one pictured is strung with steel. I changed over to nylon later.

Thanks for the suggestions !
R 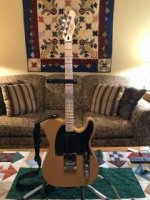 . Here’s an electric option: the Fender Tenor Tele. It’s a big bigger than your average baritone, but it can be tuned like one. They’re hard to find, but they’re interesting. https://www.elderly.com/products/fender-alternate-reality-tenor-tele-lake-placid-blue
Last edited: Jun 11, 2020

I love the Pono UL steel string big baritone. It has a 21.4" scale and a nut width of 1 3/8" (not 1.5"). The body is much slimmer, but also a bit deeper than the Kala tenor guitar. If that is too big, perhaps you could get Pono to make a regular sized baritone model with steel strings. But I have to say I think they really nailed it with their UL models which appear to be just about the right size to fully resonate, whereas a smaller instrument might sound thin-ish.

Good luck with your search, let us know what you end up with.

Pono made a steel-strung version of their Baritone Nui. Not sure if they still have it still, but you might find one used.
OP
OP
B

Thanks for the added suggestions! Aside from custom makers or custom orders, I guess I hadn’t missed too much then. Sadly, my wallet can’t afford custom maker / luthier grade instruments - was hoping to find something stock. Aside from the Pono, my Kala tenor guitar may be the closest thing acoustic wise. The tenor tele sure looks fun, but wanted to stick with acoustic.
P

I was looking for a steel string acoustic alternative and found this at the Mandolin Cafe;

I ordered a set of the recommended strings for DGBE tuning and installed them on a Lanikia Baritone I had not been using.

So far so good, 24 hrs and the, bridge, neck and tuning appear to be stable.

I had to make so adjustments to get the intonation better, but it does not sound too bad!
OP
OP
B

Excellent! Thanks for the link - will need to give these a try...

But for the higher strings, I use the g and b string respectively, from the Thomastik—Infeld John Pearse set. They are also flatwound, Nylon on rope core. The single strings are called PJ25 (g) and PJ24 (b). The whole set for guitar is called PJ116, and they were designed by Thomastik for guitar player John Pearse, as he wanted to get a steel string sound on a vintage parlour guitar, which wasn’t sturdy enough for real steel strings. Although the PJ116 aren‘t really steel strings, their sound comes pretty close, but have considerably less tension to suit the usually lighter built classical guitars. I have already tried it on an Epiphone Hummingbird tenor ukulele, and that worked really fine, too.

Of course, for the baritone uke you could also use the lower strings From the PJ116 set (again, the a and d string for d and g on the bari), but the three lower strings from that set are round wound, a round wire (I guess steel wire) on a nylon core. Thus, you have more scratching finger noises on a baritone, and, I found them to have more tension on the bari uke. So I switched to the above mentioned flatwound strings, as they are a little less tight. All four strings sound very nice and I get a great homogenous sound on my Kala baritone with a solid cedar top and lamInmate acacia body. I‘ll try to record a sound example soon.