I went to hear Taimane Gardner at the City Winery in Nashville, TN (USA), and she was fabulous of course. She and her backup band put on a great show, but I couldn't help wondering what happened to Jazzy, her former guitar player. Does anyone know why Jazzy Jazz no longer plays guitar for Taimane? I'm just curious, I always enjoyed Jazzy's playing.

I'm waiting for her to come to the northeast.

Jazzy has formed her own band. Taimane announced it on her facebook page a few months ago, I was supposed to see Taimane in Panama City last weekend at the Strummin’ Man Ukulele Festival. Unfortunately, Panama City has been severaly damaged by Michael and the Festival was cancelled. I am still waiting to hear from my Ukulele friends from that area. I feel so badly for them. I know they worked so hard to put the festival together just to have it blown away.

Osprey said:
Jazzy has formed her own band. Taimane announced it on her facebook page a few months ago, I was supposed to see Taimane in Panama City last weekend at the Strummin’ Man Ukulele Festival. Unfortunately, Panama City has been severaly damaged by Michael and the Festival was cancelled. I am still waiting to hear from my Ukulele friends from that area. I feel so badly for them. I know they worked so hard to put the festival together just to have it blown away.
Click to expand...

Thanks for the info on Jazzy. I must have missed the announcement. Taimane's new guitar player is good, but he's no Jazzy Jazz!

Does anyone know Jazzy's real name or the name of her band? I'd like to follow her and hear her band.

The City Winery is a nice restaurant/concert venue, so the room is filled with tables of four, and folks can come early and dine before the show. A bunch of ukulele friends from Nashville and from Huntsville, AL were also there, and most of us were at the front tables which are right at the edge of the stage, so we were very close to the action. Taimane could have stepped off the stage and onto my table. At one point she did kneel at the edge of the stage right in front of me while shredding away on her uke. I said "Amazing!" and she me a little smile and said "Thank You" without missing a note!

I guess I was surprised by how friendly and personable Taimane was. She chatted with audience members and had a great rapport with the small but enthusiastic crowd. She seemed very relaxed and happy to be there. She mentioned that it was their first time in Nashville and the first time they had played in a week, and that she was happy to be back on-stage and playing. She also mentioned the canceled Strummin' Man Ukulele Festival and said she hoped everyone is alright down there. She drank white wine throughout the show and raised a toast in a different language after every song. (Good thing I was drinking iced tea or I would've been too smashed to drive home!)

I was also surprised by her playing as well. She sounded much better in person than on YouTube. She played her usual flashy favorites and a few covers, but mostly she played a lot of songs from her CDs. Sure, she tore it up with her blinding right hand, but she also played several slower, more spacey pieces, and through it all her playing was really smooth and her tone was super clean. There was no harshness or sharp attack like you hear when someone overplays on an ukulele.

As a nod to Nashville, Taimane sang Dolly Parton's song 'Jolene' and invited us to sing along. She sounded good, and I'm telling y'all she could totally go Country! She could turn Nashville on its ear!

My favorite tune of the night was one of Taimane's called 'Moon'. It's a mellow, introspective instrumental that she played with only her guitarist. Just beautiful. Then to close the show, she borrowed his guitar and played and sang a very lovely song of hers solo. Wish I could remember the title.

She did a meet & greet after the show, and was signing autographs and posing for photos with folks. I didn't feel like waiting in line, so I didn't stick around to meet her, but I did get a nice group photo of all the Huntsville and Nashville ukulele players in attendance and a couple of Taimane pics (she moves around a lot): 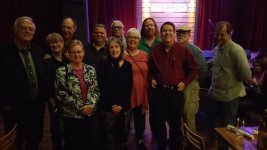 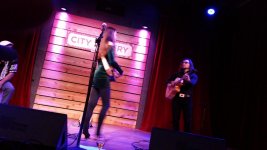 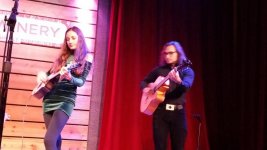 I had the pleasure of seeing her for the first time at the recent LA Uke Festival. She was amazing. I had to leave a little early to get back to the airport for my flight back to Utah, so I missed her last song. I don't know if she hung out afterwards. It would have been great to meet her.

Steady, my youngest son and his family live in Murfreesboro and I get up there now and then. Before my next visit I need to learn about the Nashville Ukulele Scene.

Osprey said:
Steady, my youngest son and his family live in Murfreesboro and I get up there now and then. Before my next visit I need to learn about the Nashville Ukulele Scene.
Click to expand...

Hey, bring a uke, we'd love to see ya! There are two main monthly ukulele jams around town: Lane Music store, in Brentwood (a suburb 10 miles south of Nashville) hosts a jam session led by me, from 2:00-4:00 pm on the first Saturday of each month. The Nashville Ukulele Society holds a jam session on the third Monday of each month, from 6:00-7:30 pm at Harding Academy, a private school in West Nashville.

Lane Music has a nice recital room which is perfect for ukulele jams, workshops, & mini-concerts, and the Nash Ukes jam is held in the band room at Harding Academy, which is perfect 'cause it's filled with chairs and music stands.

You can find info for both jams on the Nashville Ukulele Society FB page. The info is usually posted there about a week before each jam. Or, just lemme know when you're coming and I'll send you the details.
Last edited: Oct 18, 2018

I love her unique approach to performance. And those 5 strings ukes!- Some look like they've been through battle. Also spent time with her tutorial for the triplet picking- I can do it but have a ways to go!

That's it, Jazzy's band is called NightBloom! Thanks!


Bill1 said:
Thy a site called Nightbloom1.
Click to expand...