I know it's a long way off yet, but my wife is going to need a lot of convincing (she just doesn't understand why anyone would need more than one ukulele).

I got a Lanikai LU21 last Christmas and have played it nearly everyday since. I'm not really all that good, but I'm having fun and have actually used it a couple of times in my intended way, at a party and at a Scout campfire leading others.

From my very first post describing what I want in a uke:

"I'd love to be able to be at a party or campfire and pull out my instrument and lead a song.

I like the idea of a soprano because I think my best bet for practicing is to keep it with me as much as possible (EDC (Every Day Carry) if you will).

I like fast and bright music. I'm actually not too keen on Hawaiian music; it's just a bit to emotional for me. I do like rock covers on uke. I like blues and slide too. I know quite a few Tin Pan Alley songs (they have quite often been adopted as Scout songs and I'm a Unit Commissioner now). I also love surf music and just the idea of surf music.

I want to be able to have my uke with me everywhere and I'm really kind of a klutz so replaceable or indestructible are my choices.

I like quirky looking instruments. The little guitar look isn't very appealing to me, but I don't want it to look like a toy either."

I don't pick yet (and maybe never really). I don't find myself doing much tin pan alley stuff since it is pretty difficult and sounds so much different when I have the actual chords. I learned most of these songs from Scout leaders who more often than not were shouting the songs in very large campfires.

An interesting instrument would be very nice and be an obvious reason for a second instrument to someone who is not familiar with ukes. I would like one that looks different from the one I have but more importantly I'd like one that sounds a little better, more musical, more consistant.

Hmmmmm, wonder if she has more than one pair of shoes, earrings, bottle of perfume, lotion, blouse, dress, slacks, pantyhose, underpants, etc. etc. !!!!!!! Or would that be too much "reality therapy" for her?

I am not an ukulele shopping expert at all. BUT -- for that price range what do you think will be different than what you already have? I am not a fan of lateral purchases. (don't rip me it's just MY opinion) I suppose you could check out fleas and flukes.

p.s. You still play bassoon? That was my favourite instrument to play before finding the ukulele. Yeah, I like quirky too.

Inner Prop said:
I want to be able to have my uke with me everywhere and I'm really kind of a klutz so replaceable or indestructible are my choices.

I like quirky looking instruments. The little guitar look isn't very appealing to me, but I don't want it to look like a toy either."

Flea with a concert neck. Spring for the rosewood fretboard while you're at it. Under $300, and you'll hit all your requirements. I've got the original Tiki King flea in that configuration, and it's just unbeatable in terms of portability, durability, pleasingly loud brightness, and so forth. The perfect campfire/take-anywhere uke. Between the shape and the available colors/patterns, you should be able to easily satisfy your quirky-looking criterion as well.

How about this Ohana? http://www.ohana-music.com/conc/ck65d/master.html 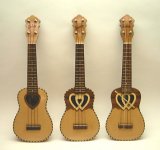 DITTO on flea or fluke, go with the rosewood fretboard and peghead tuners if you can afford it. I use my dolphin for my camp/carryanywhere uke, but the flea/fluke is a better choice for a more quality uke.

I've got to get myself to church, er I mean Off Beat in Lake Zurich and Player's Bench in Crystal Lake. Josh from Tall Grass said he would meet me at Off Beat with some bamboo ukes.

Bamboo is cool, but I don't know if it's different enough to convince the wife.

Honestly she doesn't have a lot of stuff and I have to beg her to buy new clothes for herself. The does-she-have-more-than-one-pair-of-shoes argument won't fly.

I don't play basoon anymore, since I haven't even touched one since high school a millenium ago (1984). I did love it. It was a lot of fun and pretty unique, but I don't have one and since I only played it for 4 years (as opposed to 10 active years for the sax) I've pretty much forgotten not only the fingerings, but how to read bass clef. Sad but true.

I completely agree Sukie that I don't want a lateral purchase. This second one would have to be considerably different than the first. Since I think the first was under $100, I'm thinking doubling the price should garner some sort of sound improvement. Am I wrong in thinking that?

I do like the Fleas and Flukes. I suppose with the unusual shape, color, fiberglass body and friction tuners they would certainly be significantly different.

Do you think the sound would be better (tone-wise) than the Lanikai LU21?

The main difference between Flukes and Fleas is that the Flukes are bigger and a different shape, right?

How about a flea? Why does she need convincing? You are enjoying it and you are happy, it's a gift after all... Really it's right around the corner... Good luck. Nothing more exciting than a new uke!

I think a concert or tenor necked Flea would suit you very well. They're very durable and would sound far better than your Lanikai. Plus, they're very quirky

zac987 said:
I think a concert or tenor necked Flea would suit you very well. They're very durable and would sound far better than your Lanikai. Plus, they're very quirky
Click to expand...

Aloha Inner Prop!
I am in agreement with all those who have suggested the Flea with the concert/tenor neck & rosewood fretboard.

Concert neck flea with rosewood fretboard, with one of their interesting patterns on it.

They sound great, and are sturdy. (The body is plastic, not fiberglass, btw)

Aloha InnerProp,
I was just noticing something unusual for me in this thread. Normally people post and ask what kind of ukulele they should get, and I will say something like, "you just need to go try as many as you can and pick the one that works best for you..." because the thought of buying an ukulele based on someone else's recommendation is just weird to me for something as personal as a musical instrument.

All that being said, in your current situation there actually *IS* a clear choice that will fit all your requirements. And guess what that is?

A flea! Hahahaha, yup, I think that is exactly what you are looking for. I also say spring for the rosewood fretboard.

Looks like this is going to be harder that even I thought. We talked about Christmas wishes and everyone in my house felt outraged that I might want another Ukulele.

My eldest daughter suggested that I get really good at playing, like up to professional level and then buy another one (I suppose she expects me to spend any money I make, not that I ever would make any money, especially since that's not what I want to do with it).

I explained how different this second Ukulele would be from the one I have, and how it would be a slightly better instrument and help me play better.

That didn't seem to impress them at all.

Of course none of you know what our home finances are, so whether a $200 Ukulele is really an outrageously expensive Christmas present isn't something you might know.

The thing that really surprises me is how strange it seems to all of them that someone, anyone, might want more than one Ukulele, and how/when it would ever be less than simply conspicuous consumption, like buying more than one house, or buying two yachts.
S

Here's my argument for having two ukes in the house, you could teach your wife or kids to play and then you could play together. What a great fun family activity.
You can also buy a used Flea/Fluke and save a considerable amount of money. If money is an issue, you can skip the rosewood fingerboard and just get the standard plastic one which I hear is really quite good.

Good point and idea. My youngest has shown interest.

I'd get a flea with a concert neck as mentioned several times. Light, bright, loud and well made...check. Quirky looking...check. Indestructable...check. It's a no brainer given your criteria. It would be the perfect backpack uke for scouting events, and a great second uke in general.

Mrs. Prop blessed me with another precious little bundle! I got my Flea this morning, I named her Blondie.

She's the most basic model possible; no rosewood, no colored face, no concert neck.

She may actually be quieter than her older sister, Lani, but she has a rounder sound.

Her wider neck will take a bit of getting used to. I can see where it may be advantagous, I can already feel the nice room to fit my fat fingers, but I don't want to lose my ability to squeeze onto a more common soprano neck.

I'm very happy. AND I don't seem much of a need for any more ukes, honestly.