Anyone here like to play harmonica in a holder while playing their ukulele? I used to "busk" with guitar and harmonica up and down the east coast while cruising in my sailboat. Now I'm settled down in a house on an island and playing harmonica and baritone ukulele with a band. Anyone else? 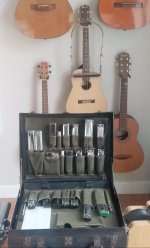 I don't play the harmonica yet, but a member of our band does. She tried the holder, but found it very annoying. She carries the harmonica of the key of the song we're playing with it in a pocket on her blouse or pants. She just lets her uke hang while she blows.

I have tried it. One piece got going pretty well.

I modified my old Hohner holder with a couple of stainless brackets for more adjustments for tilt and height. 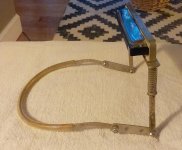 I play blues harp with some of the songs my uke group does, but because I do a lot of wawa and stylizing, the hanger doesn't work for me. I also do what Nickie said and hang my uke around my back like Johnny Cash while I play. I actually just setup my Blackstar Fly3 Duo amp with a condenser lavaliere mic and 48v power pod.

I don't think I have what it takes to learn and play the harmonica but I've considered using one of those harmonica racks with a kazoo instead.

I moved over to harmonicas as my main instruments a couple of years ago, I mainly use chromatics & tremolos to play melody, but I do have a selection of diatonics, which I may eventually get around to - I can just about do some bending of notes, but I need to learn tongue block to play old time style.

Croaky Keith said:
I can just about do some bending of notes, but I need to learn tongue block to play old time style.
Click to expand...

(I'm think I recently told this story here, but here goes anyway.) When I first played guitar in 1965, and all through the 70s, I tried to learn harmonica with the little instructions sheets that came with them, but I couldn't get the tongue block thing. A few years later I was working as a propman at Paramount Studios on a TV pilot starring Al Molinaro from Happy Days and Lyle Waggoner from The Carol Burnett Show. A couple of days in the producers decided the script needed a rewrite, so for the next 2 hours we sat around the set. To break the lull, Al brought out a ukulele and started singing a song, which prompted the casting director, an ex-dancer, to do a soft shoe, and Lyle pulled out a harmonica and kicked it.

As soon as they were done, I made a beeline to Lyle, and said that I've been trying to learn to play for years, but can't get it. He said he would show me the same way the person he learned from showed him. He took my hand and put the soft fleshy edge in his mouth and played it like it was a harmonica. That was all I needed, got tongue blocking then and there. I pulled out my harmonica and very quickly learned On Top of Old Smokey.

A couple weeks later I was working on another pilot, a co-costar was a young guy who heard me practice back stage during lunch. He came over, pulled out a harmonica and played some really good bending blues. I asked how he does that, he said it'a matter of pulling your tongue up and down, cupping it. I got that right away as well because when I was a kid, I'd snap my tongue really loud, which strengthened my tongue muscle and made it fairly easy to get the bending sound.
Last edited: Jul 11, 2021 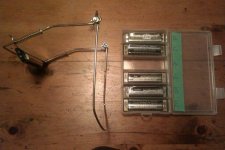 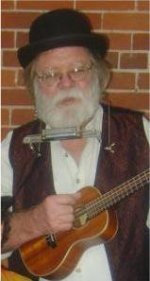 I prefer to play the harp with my hands, but do play using a rack when I'm playing solo. I have an old Elton rack that I bought in the early sixties. I've modified it by bending the arms so it hits my mouth at a better angle and adding lock washers so that it doesn't slip.
I only play in the first two positions. Folkier tunes or tunes like Old Rockin'Chair's Got Me
seem to work well in first position (key of A on an A harp). Blues and bluesy tunes work better in second position (Key of E on and A harp). I haven't done much experimenting with third position or other positions. My neighbour, Carlos, can play 12 keys on a 10 hole diatonic harp. I leave my harps in the case if he's on the gig.

mikelz777, I have also used my rack for a kazoo. 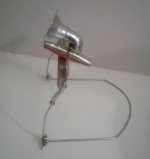 The trick to "wailing" the harmonica in a holder is the proper harp. If you can find one, a Hohner "extreme bend" works really well but they have been discontinued. The last couple of years, I've been using Easttop harmonicas. Great bending capabilities, at a reasonable price. My first holder was bent out of a coat hanger...
F

Hey Rusty, I am down the road from you ouside Richmond Va. I have been playing rack harmonica for about 60 years. My dad played harp and I picked it up from him. He made my first harp rack when I was 10. I played with piano and I got an upright Bass when I was 14 and started playing rack harp with my bass. I sang and played upright bass with a Jazz quartet and would often use my mouth harps in our performances. I then toured full time for a little over 35 years with my identical twin brother. We did our original contemporary Christian music all over North America as well as eight countries across the big pond. I think the hardest instrument to use a rack harp with was my electric violin. I started playing the ukulele back in 2012 after I had retired. I inherated a Favilla soprano uke from my father in law and started watching Youtube videos on how to play. It was my first fretted instrument. I used tell Boyd, my twin brother, that God did not like his guitar. Boyd and the audencies we sang for would all look at me as if I were insane. I would then say "The Bible say's to Fret Not". It always got a laugh. Well now I am playing Frets !! Check out "Floyd Amason" on Youtube if you get a chance. I have about 50 songs uploaded, most of them with my ukulele and harmonica, a few with my upright and one with my fiddle. I would have to say that out of all the instruments I play, the Ukulele is my favorite !! - FLOYD
Last edited: Jul 12, 2021

I've never gotten a holder, which is just as well. Judging by the picture, I'd say you have more harmonicas than I do. : )

Hi Floyd, I listened to a couple of your videos- nice job! You clearly demonstrate that you can effectively "wail" a harmonica in a holder. It takes some practice and good harmonicas. It appears you are playing "Lee Oscar" harmonicas? One of my harps of choice. Back in the early '80s,while stationed in Japan with the Navy, I purchased a couple of "Major Boy" diatonics by Tombo. These harps were great right out of the box, and I always regretted not buying more. Fast forward about ten years, "Major Boy" shows up rebadged as "Lee Oscar" by Tombo.

rustydusty said:
Hi Floyd, I listened to a couple of your videos- nice job! You clearly demonstrate that you can effectively "wail" a harmonica in a holder. It takes some practice and good harmonicas. It appears you are playing "Lee Oscar" harmonicas? One of my harps of choice. Back in the early '80s,while stationed in Japan with the Navy, I purchased a couple of "Major Boy" diatonics by Tombo. These harps were great right out of the box, and I always regretted not buying more. Fast forward about ten years, "Major Boy" shows up rebadged as "Lee Oscar" by Tombo.
Click to expand...