I'm a guitar player who just bought his first ukulele. There seems to be very little info out there about Beltone, (not Belltone).
Beltone.com is only about hearing aids. Does anyone know anything about this little beauty? History? Value?
Thanks is advance for any info!

Looks like a baritone. I’d try emailing Jake Wildwood, he has an awesome website filled with info on quirky vintage stringed instruments. He seems to know his stuff. That said, your uke looks to be in pretty rough shape. If it has any value it will probably need to be done over.

I think it is a baritone. Dimensions are 29x10x3. I found Jake's site but only one Beltone uke and guitar on it. I'm going to shoot him an email. Is this considered "pretty rough" considering the age? It looks pretty sweet. I don't know if I would want to have it restored. Thanks for the info!

One of the pictures it looked like the back and sides were coming apart. I could be seeing it wrong! I honestly know nothing about that uke since I’ve never heard of the brand, it could be a real gem for all I know. I hope you can get some answers!

From what I've found, Beltone guitars were being built in the 1920's, maybe 1910's. There seems to be little info out there, so I'm still trying to figure it all out.
P

The dimensions of the instrument have little to do in defining if a baritone or other. Measure from the nut to the middle of the saddle, if it's 19" or more, it's a baritone. If 17 to 18", a tenor.

Earliest baritones I've heard of was Favilla, who started building them in 1946. They were primarily intended for kids learning guitar basics with a smaller instrument and narrower reach of four strings. It caught on pretty fast with other manufactures. I'm sure they were earlier ones made but Favilla mentioned they were the first.

Lardy's ukulele database gives you all the info you're looking for. It's the post-1962 Japanese import version, probably made by Zen-On.

Both Favilla and Vega claim to have invented the baritone ukulele, Favilla probably having the better papers (see a good discussion on https://www.fleamarketmusic.com/bulletin/bulletin-nonpop.asp?BulletinID=981).

ukulelekarcsi said:
Lardy's ukulele database gives you all the info you're looking for. It's the post-1962 Japanese import version, probably made by Zen-On.

Both Favilla and Vega claim to have invented the baritone ukulele, Favilla probably having the better papers (see a good discussion on https://www.fleamarketmusic.com/bulletin/bulletin-nonpop.asp?BulletinID=981).
Click to expand...

Thanks for the info. I checked the fleamarket link and I couldn't find a single reference to Beltone. A search of their database for Beltone says "We are currently adding products to this category. Please check back soon!" The Lardy's search for Beltone reveals "Beltone 1920-30s" and "Belton 1960's Japan". The first one shows 2 ukes, but from the picture quality, I can't confidently say that either are Beltones. It states:

"(Harry) Perlberg & (Abe) Halpin were New York instrument distributors from 1910 to the some time in the 1930's (in 1927 Abe Halpin left the company and it became Harry Perlberg Co. and I can't find references to it after 1929 so it is possible it was a victim of the Wall St. Crash?) They are one of those names that Martin is suppose to have made some instruments for, (records indicate they did, but only 12 Ukuleles, 15 Guitars and 10 Mandolins).
Their main "house" brand was Beltone under which they distributed the whole range of fretted instruments, Guitars, Banjos, Mandolins and of course Ukuleles and Banjoleles. (The brand name Beltone was registered again in 1962 and used on Japanese Imported Ukuleles but I don't think this had anything to do with P&H?) They also used the name Wapiti on Ukuleles, and possibly other instruments(?), while they were still P & H.
They may have had other house brands, Blue Comet is a name that crops up but I can find no conclusive link, and as a distributor they distributed a number of instruments they didn't directly brand. I have seen an article saying Nonpareil Ukuleles were added to the 1926 catalogue and an advert saying they distribute them. I can find nothing on Nonpareil that isn't linked through P&H though I have seen it mentioned a couple of times that the instruments themselves were manufactured by the musical instrument case maker Bulwin Manufacturing Co. of Los Angeles, (and that there was a really tiny playable novelty model too), so think this is probably another P&H brand name too, though again but I can't be sure."

The Beltone 1960's link shows "page not found. We're sorry, but we were unable to locate the page you requested."

Were you able to find additional info that I missed? Neither of those sites point to mine being "the post-1962 Japanese import version, probably made by Zen-On." The above reference does however reveal it very well could be from as early as 1910.

Thanks again for your help!

Ah, David must have missed a page there.

Japanese builders of musical instruments in the 1960s-through-to-1980s are still a bit of a mistery, and there's no definitive guide, especially not for the ukuleles. There were factories (gakki), distrubutors (oroshiuri) and brands (burando) made wonderful combinations, with fanciful names and lots of corporate take-overs. Beltones were probably made by Hayashi Gakki, after they had been taken over by distributor Zen-On (not the other way around) in 1954 and started producing ukuleles in 1962: https://spinditty.com/instruments-g...ade-In-Japan-Badged-Guitars-from-1950-to-1980. The same combination probably produced the CF Mountain ukuleles (pronounce rapidly) a bit later.

Thanks for the additional link. This is good info to add to my database on Beltones. It's quite possible it could be an older Japanese model, but I don't know if it's definitive. I am still holding out hope that it's one of those earlier (Harry) Perlberg & (Abe) Halpin's from 1910 to the some time in the 1930's discussed above. Thanks everybody for the help! Any further info is still greatly appreciated!

Some additional info I received from Retrofret:
"The written history of this brand is very brief, but as far as we can tell from the features of this ukulele, this could have been built in the Oscar Schmidt factory. Since Beltone instruments were built for and sold by the firm of Perberg & Halpin in New York, the company had commissioned instruments from a different builders (one of them being C.F. Martin). Without having the instrument in-hand, it would be difficult to confirm the maker and age of this particular ukulele."
U

The Beltone logo is definitely a Japanese one from the 1960s. Some of the construction details also point to a Made In Japan origin: the smallish soundhole, the heel that only reaches halfway, the saddle system...

Still, these things are excellent value for money!

What are you using as a reference? Do you have any pictures I can use to compare? Even a guitar or mandolin with that specific logo would help. I sure hope you're right on the "excellent value for money!" but I'm going to keep it and learn how to play it! Roar/Meow!
U

Here are some samples borrowed from elsewhere on the internet (I can't seem to make the same size - but by looking at their origin, you can now still track down their context). 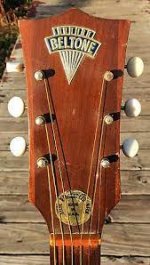 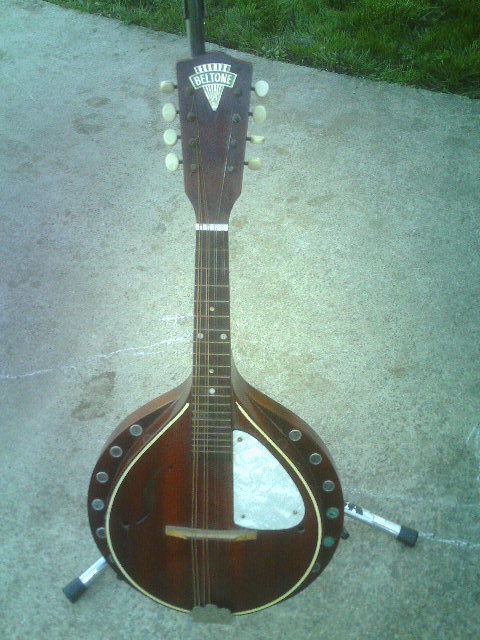 Great Pictures! Thanks! Any idea what time period these are from?

That looks like a Japanese baritone uke from the 1960s. It doesn't look very special and I doubt it has much value.

Thanks Chris667. You could be right. Do you know of a site with 1960's Japanese baritone Ukes labeled "Beltone" that looks like this one that would support that? Thanks again for any assistance!

The bridge looks like the ones you find on other imported 1960s baritones. I've never seen one labelled "Beltone", but it was common for distributors to buy instruments made abroad and relabel them.

Just because it is cheap, doesn't mean it's bad. Quite the opposite with baritones, I reckon.

I don't think we know yet that it's "cheap" do we? So far that seems to be the consensus - that it's an older model Japanese model. That would suck! lol From an early 1900's to a newer Japanese model! I'm still not 100% convinced. No big deal, though. It's a neat little uke! Thanks again!.
You must log in or register to reply here.
Share:
Facebook Twitter Reddit Pinterest Tumblr WhatsApp Email Share Link
Community platform by XenForo® © 2010-2021 XenForo Ltd.