He all, how difficult is it work with a warped finger board?

I am thinking of soaking it and then clamping it flat to try and correct the warp before I add the frets.

Am I asking for trouble?

I am building an electric baritone ukulele and bought the finger board from a reputable luthier. He has offered to replace it, but suggests I should be able to work with it as is.

The neck is maple and the fingerboard is cherry.

You insight would be appreciated.

Yes, what Beau said... Remember: wood is gonna do what wood wants to do which is return to its original shape. We force wood all the time into shapes it doesn't want to be in, but this can come at a price as potential energy turns into kinetic energy which means... crack! How warped is it? Send pictures please.
P 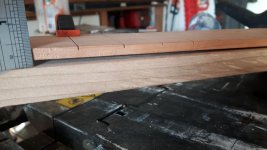 To me this looks very warped.

Thanks for your input.
P

How long have you had it? Sometimes one side would get lower or higher in moisture than the other if sitting on a surface and the two sides do not have the same humidity level on both sides.

The way I would think about this, how much force does it take to push it straight? If it yields under light finger pressure, it might be ok. It will be glued to something much stiffer and more stable than itself, so it probably won't make the neck/fretboard assembly warp after it's glued (especially if the neck is reinforced). And modern glues are really good, so the glue joint probably won't fail. So it might be perfectly fine.

Personally, I might be somewhat more worried about a twist than a bow, but it's hard to tell from your photo exactly how it's warped.

Full disclosure: I've been woodworking for many years, thinking about and observing how wood movement affects things like furniture, but I'm fairly new to making instruments. I'm interested to hear more opinions about this.

It only looks like about 1/8” to me and if that is a consistent bend up, rather than a twist, I would not worry about it. One thing in your favor is installing the frets will likely remove some of the bend. Put a carbon fiber bar in the neck and you will be fine.
T

Thinning the fingerboard a millimeter or so might not hurt either, reducing the strain required to straighten it.
C

Thanks all for the responses. I decided to ask for another fingerboard as I am not confident in the building process.

The luthier agreed and will send me a new one.

The warp is definitely a twist. The attached image shows the unfinished body and neck. 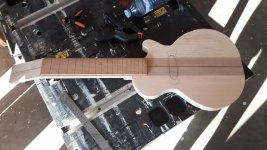