I'm thinking of experimenting with creating some waterslide decals with an inkjet printer to use on headstocks. Does anyone have any experience they can share?

Yes, I've made a few for my bass ukes. One important thing I learned is after printing and before immersing in water, I had to spray the decal with a fixer and let it dry for a few minutes so the ink would not bleed off. I also learned that lighter colors do not print solid, they're always transparent to a degree. The best color is black. I actually did one in tortoise that came out well.

I used them for many years on my instruments, they were professionally made. The biggest problem I found was that you need many many coats of finish to make the decal edges disappear. I no longer use them, but never say never.
B

Thanks for the responses, I'm going to give it a try.

I love em…. This one was created for a lap steel I built using a broken Telecaster for parts.

And this one is what I use on my instruments now.

Just make sure you lay down a coat of your fav finish first. They don't stick well to wood. Them finish at least 2 coats over em to make them last.
B

Bill1,
Many thanks for posting that.
Your description of this process has me intrigued. It sounds as if it could be suitable for 'traditional' builders. Do you have any pics of the results as applied to ukulele/guitar making?
T

I have used tracing paper to good effect. It is easier to get than most things and reasonably cheap too. this one was embedded in varnish (Bondall Monocel)

One of the above comments did get me to my shed to experiment though (after a few problems with a new bottle of superglue that appeared to have too much set retardant in it) I tried gluing the tracing paper with the image down. This meant flipping it on the computer as well so it would not be mirrored - i.e. with backward writing
a quick test showed it was fairly similar and so resistant to scratching I could easily take to it with a power sander. 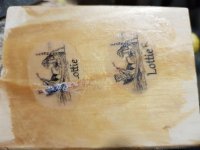 The colour images of inkjets rely on the underlying white so (similar to the issues experienced by the waterslide transfers) colours can look a little washed out and choosing simple images will make loss of detail less of a problem. More of a problem over time is that these cheap inkjet printer inks are notorious for fading. 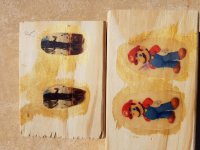 This one is embedded in superglue. I have used inkjet printing here. I have had issues with lazer printed artworks and superglue, they didn't run but when I touched them they smudged (before the glue set)
Before glue 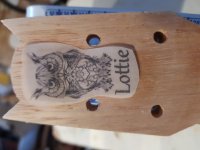 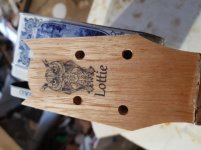 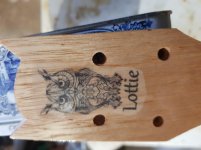 This thread has produced some interesting techniques. Thanks everyone.
B

bazuku said:
This thread has produced some interesting techniques. Thanks everyone.
Click to expand...

Fully agree with this.