What’s the story behind this Kaai Ukulele?

I bought this ukulele at a local auction with the intent of letting my daughter play with it. I quickly realized its fairly old so I wanted to find out more about it because I’m not so sure she’ll get her hands on this one, haha. I googled a few things but what I found was inconclusive so I thought I’d turn to the experts here on the forum.

Can anyone tell me more about it?

Also, it came with a pretty sweet old case that is velvet lined.

Pictures can be seen here: https://photos.app.goo.gl/n1NggmykJdBsYEwG7

Thanks in advance for the info!

(And if this question should go somewhere else just let me know, newbie here).
Last edited: Nov 6, 2021

Try this google search if you have not already:

Sorry @rustydusty! Rookie move. I uploaded them and didn’t notice they were too big. I threw them in an album here: https://photos.app.goo.gl/n1NggmykJdBsYEwG7

@rainbow21 - I tried all the basic searches and found some good info, old ads, company change dates, etc but could never find a sticker like this one has. The closet I got was an ad for lessons by the Kaai Manufucturing company. They were delivered in the same building that is referenced on this sticker - the Young Building - but had a different address number.

This from Tiki King:
"Made by the Kaai ukulele manufacturing Co. of Hawaii. which was run by Ernest Kaai. Ernest Kaai was called "the greatest Hawaiian ukulele player" and he also wrote the first known Ukulele instruction book in 1910. Earnest Kaai Hawwaiian Ukulele Company was in business from about 1909 until 1920 when it was sold to the "Aloha Ukulele Manufacturing Company", although Ukuleles continued to be produced with the Kaai name for many years. the "Aloha Ukulele Manufacturing Company" went out of business in the mid thirties. Ernest Kaai died in 1962. Many Kaai (and other Hawaiian instruments) are marked "Honolulu, T.H." the T.H. stands for "Territory of Hawaii" a term which was in use from 1889 until Hawaii became a State in august of 1959."

I'd say you have a rare find there, something very special. It looks to be in excellent condition for its age. I suspect it is quite valuable.
OP
OP
T

Thanks @VegasGeorge! I added a few more pictures to the album of the inside.

Really hoping someone else has one of these with a similar sticker, case, etc. Fingers crossed!
R

Two years ago, I was looking for the provenance and value of an Ah Tau Kam ukulele (about a century old). In Ukulele Magazine, they referenced Jim Tranquada at Occidental College in California. He was kind enough to provide the information I sought. Try this email: jtranqua@oxy.edu

The wood tuning pegs are are surprising. It's clear someone was trying to use some wooden pegs on it. And was putting them in from the wrong side. They obviously were intended for a different instrument.

Shawn Yacavone at UkuleleFriend.com might know something about it. Though he doesn't have anything from this time period showing on his museum page.
M

That is an interesting uke for sure. Looks like mahogany, and it almost appears that the wood grain of the top continues into the fretboard. I assume that this uke is quite old as the fretboard is flush with the body and does not overlap, which is a design that Martin introduced to ukes and was later adopted by other uke builders including most Hawaiian ones. It seems there was no nut or saddle and strings went directly from the bridge over a large zero fret to the pegs. The frets look in great shape, maybe they were replaced.
OP
OP
T

Hey all! I heard back from a few of the contacts y’all pushed me to and wanted to share what I found out. It looks like I have a 1912-1917 Kaai. Here’s some of the info I was able to obtain:

The best evidence for the age of this instrument is the name on the canvas case: Kathleen Peelor of Placentia, Calif. I poked around a little and found that Kathleen Peelor Tuffree (1893-1984) graduated from Fullerton Union High School in 1911 and married in May 1915. Since the case has her maiden name, it makes sense that she acquired it before her marriage in 1915. The Kaai Ukulele Manufacturing Co. was listed at 69 Young Building in the 1912 Honolulu city directory, so my guess it was made sometime between 1912-1915. My guess would be that she bought it in Honolulu, since Kaai catered primarily to tourists. That would also explain why Kathleen wrote "U.S.A." as part of her address--Hawai'i was still seen by most mainlanders as a foreign country during this period. This kind of bottom-opening case is consistent with a 'ukulele made 1912-1915.

To say the least, its has a bit too much antiquity to be a plaything for me daughter. I think I’ll put it up for sale and use the profits to buy a proper kid’s guitar and put the rest in her savings account.

I’ll get this up in the marketplace here shortly. If anyone has any tips about listing/selling let me know. I do my fair share of it on other online platforms but selling on a forum is new to me!
Last edited: Nov 10, 2021

There is some info re the Kaai company and ukes on the Ukulele Hall of Fame, using their search feature. I saw a pic of one there, it was koa.

Hey, here's one on eBay! Oh wait, it looks like yours! That was a nice find! 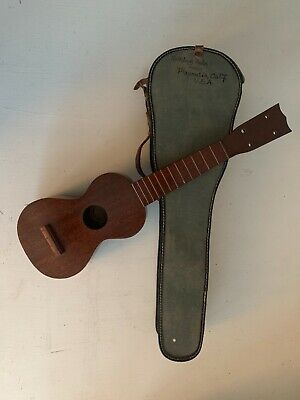 Find many great new & used options and get the best deals for ~1915 Kaai Ukulele Manufacturing Company Soprano Ukulele - Mahogany, A1850 at the best online prices at eBay! Free shipping for many products!
www.ebay.com

Wow, cool pictures and congrats on the good luck.
G

congratulations on finding out all the information which will help you move forward. wish i was as fortunate with my SS Stewart taropatch. talked and emailed and quizzed the forum (good feedback) but no conclusive information. the little guy just lays in it’s case wanting me to make up my mind.

Ukecaster said:
Hey, here's one on eBay! Oh wait, it looks like yours! That was a nice find!

Find many great new & used options and get the best deals for ~1915 Kaai Ukulele Manufacturing Company Soprano Ukulele - Mahogany, A1850 at the best online prices at eBay! Free shipping for many products!
www.ebay.com
Click to expand...