What do you guys think this banged up Pono Baritone Ukulele is worth? (video)

https://www.reddit.com/r/ukulele/comments/819kx8
This thread was originally a thread asking what this Uke might be worth, but ive decided to sell it. So the video is a bit irrelevant at times but it still gives you the idea of what this thing is like. I dont know how to edit the Thread topic...

Currently taking offers, willing to negotiate. Ive been a proud owner of this uke, and its done a lot for me. It sounds great. Also theres a chance I could be really famous one day and this thing could be worth a lot more... (just kidding.. well kind of...)

I think I mentioned everything I had to in the video.

You can find this ukulele here new: https://www.theukulelesite.com/shop-by/brand/pono/pono-pc-series-spruce-mahogany-baritone-sunburst-mbsh-s-sb-pc.html

That price does not include the LR Baggs pick up which was around 200 at the time of purchase. all in all it cost about $1200.00

As I said this baritone came with a fully functional case (in the video) an LR Baggs 5.0 pick up still functioning perfectly. and of course some structural damage. However, as I stated its done nothing to the sound.. It actually sounds a little better since the "accident".

ive had it for about a year. Ive played many-a-gig with this thing, and its never done me wrong. I still gig with it now. But like I said i've recently acquired a new instrument which I will now be gigging/playing with. So in the future I may want to sell it... I dunno...

Anyways, whaddya guys think this thing is worth considering the damage to it??

No idea what its worth but you can put it up for what you want for it and see if you get any offers.
If its too high lower price until the price is right.
It may help to list your location and whether or not a prospective could look it over and play it.
I'd avoid eBay unless you want to move it immediately for fire sale prices.
Good luck with the sale.
T 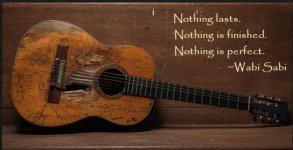 it just so happens in the small town that I live in, theres a popular store called "wabi sabi"... I wasnt aware it was a person with lovely aphorism's

I was going to reference Willie Nelson's Trigger as well! Keep it, play the crap out of it! I don't know if you busk as well as gig but you could always have it as your busking uke so as to preserve your new instrument?

Not that I could afford it, but I'd be interested in what your asking price.

You'll get more from keeping it, than selling it at a knock down price, which is all I think you will be offered for it with that damage.
(Take the pick up out & put it into another uke.)
M

Since no one has thrown a number out, I'll give my 2 cents. Given the damage and general condition of the instrument, I'd say $300 max as is. Or pull the pickup and you could probably sell the Uke alone for $250. It's going to take the right buyer, but they're out there.

maki66 said:
No idea what its worth but you can put it up for what you want for it and see if you get any offers.
If its too high lower price until the price is right.
It may help to list your location and whether or not a prospective could look it over and play it.
I'd avoid eBay unless you want to move it immediately for fire sale prices.
Good luck with the sale.
Click to expand...

I noticed your signature line about your Magic Fluke. I'm thinking about getting a Fluke or a Flea, but I've read and seen two negatives. The finish on the top tends to wear away, more so than on other ukuleles, from contact with the player's hands. And, aside from being hard to see, the plastic frets tend to get dented from the strings over time. Barry Maz mentioned both of these conditions in a long term review of his Fluke. Have you noticed either of these?
T

My Flea had developed a divot on the plastic zero fret, resulting in an occasional ping sound while playing, as the string slid to the side. Annoying. MF sent some little plastic sleeves to install over the string at that spot. Otherwise nice, but I sold it to get an all wood uke.
You must log in or register to reply here.
Share:
Facebook Twitter Reddit Pinterest Tumblr WhatsApp Email Share Link
Community platform by XenForo® © 2010-2021 XenForo Ltd.