Last year I picked up a tenor set of the strings Matt at World of Ukes developed with Worth. They're clear fluorocarbon and he says they're optimised for finger picking (a claim I was dubious about - strings are strings, right?). I've finally played them for a month or so and, as there's not much around about them, thought I'd share my thoughts on them. Usual caveats apply - strings are a very personal choice so YMMV!

First up, they come individually wrapped with dad jokes on the packets. Not going to lie, this really tickled me and I thought it was a great touch: 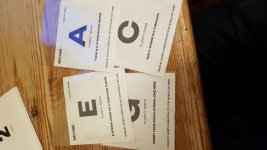 I popped them onto my fluke as it's currently the only tenor I own and tuned them up. First impressions: holy cow, that g string is high tension (this set is re-entrant). Like, I can't get enough volume out of it it's so high. The set as a whole is a high tension set and that g is noticeably taught.

Well, having been playing sopranos and baritones for a while I wasn't ready for this - the nyltechs these replaced were easy, these were hard. I popped a low G on instead for a while but decided to try again with that high g.

I have to say, I'm really glad I did. Now I've got used to the tension (no worries for fretting as the fluke action is lovely, it was needing to dig in more with my picking hand that was the adjustment) they are loud and, yes, have really good clarity!

I also had to eat my reservations - they are wonderful for finger picking and only so so for strumming. The tension and fluoro sound means individual notes almost punch out if you're playing at volume and shimmer beautifully played softly. The warmth for strumming has gone though and it's more effort to strum against that tension than I can be bothered with - I find myself grabbing other ukes for a singalong. The problem I'm now having is that I'm struggling to adjust the other way for my soprano and keep playing with a monstrously heavy touch.

I would absolutely recommend these - no plans to change them for now. They do lend themselves more to one style of playing than another though. Again, YMMV!

hmm, too bad they're only available in UK. I'd try them with the idea of tuning down a few half-steps, maybe to A?

Jim Hanks said:
hmm, too bad they're only available in UK. I'd try them with the idea of tuning down a few half-steps, maybe to A?
Click to expand...

Tried them at Bb for a couple of days and liked it!
R

Jim Hanks said:
hmm, too bad they're only available in UK. I'd try them with the idea of tuning down a few half-steps, maybe to A?
Click to expand...

They may be available to ship here. I ordered some strings from them. You have to contact them directly (email fine) as the cart checkout will not allow the transaction to be completed due to shipping costs/exchange rates. As it was, shipping was only a few dollars.

Pirate Jim said:
Tried them at Bb for a couple of days and liked it!
Click to expand...

Yeah, I do normal tenor strings at Bb. With these being so high tension, I figure they'd go even lower.
Last edited: Jun 26, 2019

Just a word on these strings - I don't make them myself, Worth do - they sent me lots of different sets from outside their catalogue and I restrung uke after uke until I had whittled down the selection to the ones I like the most. I'm predominantly a fingerpicker, so figured if I liked them for that style more than the others I tried, I could say the were good for that style in particular!

If anything, as a ukulele retailer, this process has allowed me to definitively answer the often asked question, 'what are your favourite strings'!

Yes, that's definitely one way to pick a favourite set! I've just been specifically strumming these for a bit and actually they're growing on me for that too - again, a little technique adjustment to dig in more and they really project. Combination of the uke and these strings and you'd definitely hear me coming

Hey Matt, I didn't know you were on here.

This is the thread that prompted me to order a couple of tenor sets. They just arrived in the mail today, and I won't have time tonight to put them on, but hopefully in the next few days I'll be able to. What I'm going to do is start with low tuning, probably ridiculously low like G or Ab and slowly tune up until it feels like the tension is acceptable. Just see what happens.

Thank you for the review!

I will add a couple of sets the next time I order from World of Ukes.
(Reminder to self: place order before Brexit....)

Quick update on these: I've ended up loving these strings. Highly recommended.

Downside is that last night I noticed the top of my Fluke dishing under the tension. I've not owned a Fluke before so it may just be lightly braced and this will happen regardless of the strings. Going to pop some nylons on there and see what happens - if the dish returns then I'll stick with the Clarities. If it doesn't then I'll reluctantly ditch the Clarities for the sake of the uke. I suspect something like a Pono would do really well with these strings as they're braced for higher tension.

Or do like I did and just tune down. Works great at A tuning, in my opinion.

Jim Hanks said:
Or do like I did and just tune down. Works great at A tuning, in my opinion.
Click to expand...